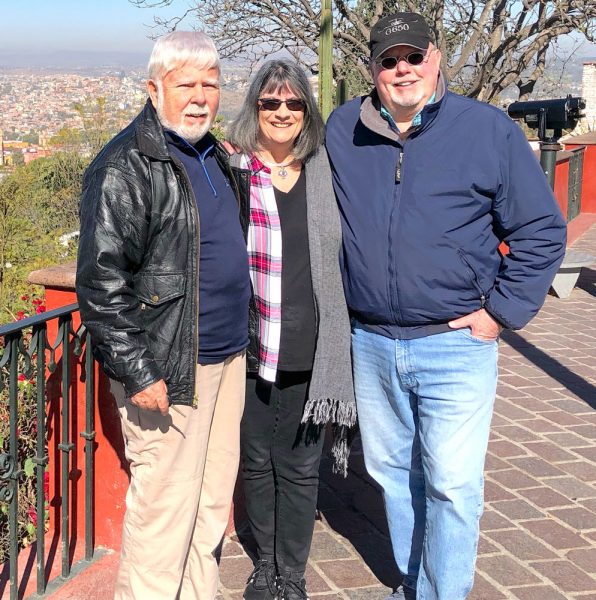 Jim and Kelley Luedeke in San Miguel de Allende, Mexico, a small colonial city about 3 and a half hours north of Mexico City.

You never know who you are going to meet at a museum!

Last fall, a Subaru Outback pulled into the parking lot at the Catawba Island Historical Society’s Union Chapel Museum with a severely bug-splattered front bumper. Moments later, a grey-bearded man and a woman with a beguiling southern accent signed the museum’s guest registry as Jim and Kelly Luedeke from New Braunfels, Tex. 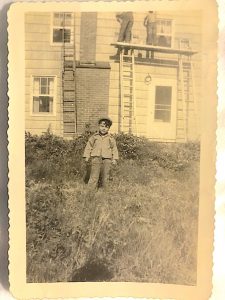 Jim and Kelley Leudekes had driven to Catawba Island to revisit the home where the Leudeke family lived when Jim was born. It is the first house west of Union Chapel on the south side of East Porter Street.

Craig Koerpel, a Historical Society Trustee, was on duty as a museum docent that afternoon. Part of a docent’s job is to determine why people have stopped to visit and if they have any specific historical interests. With this kind of background, it is possible to tailor tours of the exhibits and displays. Some patrons prefer wandering about without assistance. Others welcome having a guide to provide detail and answer questions.

Preliminary conversation with the Luedekes quickly identified some common ground. When Koerpel was considering retirement options, one of the places he investigated was Texas Hill Country. New Braunfels is there. Not only had he visited their community, but he had purchased and worn out a T-shirt from an iconic local establishment called Gruene Hall. It is the oldest dance hall in the Lone Star State.

Another coincidence was Luedekes have a seasonal home in San Miguel de Allende, Mexico, a small colonial city of cobblestone streets and Bougainvellea clad walls about 3½ hours north of Mexico City. They were planning to visit in mid-January. Koerpel was going there for a vacation at exactly the same time.

Between what Koerpel learned about the Luedeke’s at the museum, and during the day he later spent with them in San Miguel, he continues to be fascinated and impressed by the diversity of ties people have to our lakeshore community.

The Leudekes had driven to Catawba Island to revisit the home where Jim’s family lived when he was born. It is the first house west of Union Chapel on the south side of East Porter Street. The building had been a barn in the mid 1940’s. Jim’s father, Merlin Franklin Luedeke, bought it and converted it to a house.

At the time, Merlin and his wife, Inez, were responsible for operating Port Clinton’s phone company. Merlin not only supervised the business but also went out to do line work when needed. Inez ran the switch board.

Jim recalled that Al and Vivian Sharp lived in the large house that still stands across from Union Chapel. Al was a gregarious man, referred to by some as the unofficial “Mayor of Catawba.” His wife, whose full name was Vivian Maud, was the daughter of John W. Gamble, proprietor of the exclusive Lakeview Hotel which once stood just around the corner on North Crogan Street. Vivian attended Oberlin College, studied music, and worked as a local piano teacher. Jim and his older brother, Jack, called the Sharp’s Grandma and Grandpa even though they were not actually related.

Jim’s father was offered a job to run the telephone company in Ketchikan, Alaska when Jim was five years old. The family set out by car, stopping at tourist attractions like Mt. Rushmore along the way. When they arrived at Alaska’s Salmon Capitol, as Ketchikan was known, the home they secured was high on a mountainside. It was a 144-step climb to get there from the city below.

After two years in what would become the country’s 49th state, the Luedekes returned to Catawba Island. They lived in a duplex dwelling on the southest corner of East Porter Street and NW Catawba Road. In the mid-1800s, Catawba’s first commercial winery had been opened on that site by Swiss immigrant Benedict Furrer.

Merlin Luedeke worked as a civilian contractor for the U.S. Air Force when he returned to Catawba. His role as a telephone communications engineer required a lot of travel. Ultimately, he moved on with the family to Oneida, N.Y. Jim attended high school there. His junior year was spent as an exchange student in Peru which gave birth to what would become a lifelong love of the Latino culture, language and people.

Following undergraduate work at Trinity University and graduate school at the University of Texas, Jim was commissioned as an officer in the regular U.S. Army. He met Kelly, a Texan and his wife to be, while at UT. They were married a year later after Jim’s term as a Rotary Foundation Fellow to Lisbon, Portugal. He then served as a military advisor in Viet Nam as a prelude to being assigned to U.S. Army forces in Panama for two consecutive tours.

Jim was selected as Chief of the Liaison Detachment of the 470th Military Intelligence Group with Panama Defense forces. He was subsequently appointed Treaty Affairs Officer of the 193d Brigade. In that capacity he served as Master of Ceremonies for the historic return of the Panama Canal lands and waters from the United States to the Republic of Panama in 1979. He retired in 1983 as a Lieutenant Colonel assigned as assistant army attaché at the U.S. Embassy in Lima, Peru.

Jim and Kelly have two children, a biological son and a daughter adopted while they lived in Peru. Active in their church and community, they have still found time to make more than 40 trips from New Braunfels to San Miguel since taking on the construction of their home in Mexico. The trip by car is over 700 miles each way.

Comfortable with automobile travel as they are, it is likely the Luedekes will be back to Catawba Island in 2022. Kelly enjoyed the lush green surroundings which are quite different from the more arid conditions of the Southwest. Jim says he has additional steps to take down the Memory Lane that leads through Ohio.

Koerpel and the Catawba Island Historical Society’s Union Chapel Museum look forward to again being a part of their journey.

The museum will open for the 2022 season on May 14. Hours planned are from 10 a.m. to 4 p.m. on Monday, Wednesday and Thursday, and the second and fourth Saturday of each month until Oct. 15.