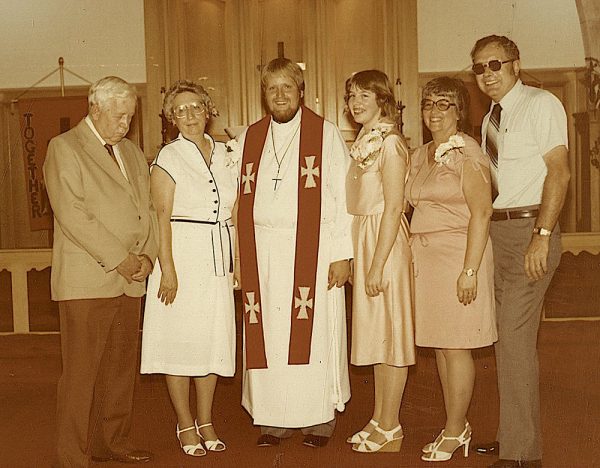 Reverent Jim Lehman, with his wife, Jean, and family, at his ordination on June 29, 1980

When the Reverend Jim Lehman was growing up in Toledo, one of the things he loved most was doing things with other youth at Epiphany Lutheran Church. The church had a very active youth program, and he developed a great relationship with the youth pastor.

“I had a lot of wonderful experiences in youth ministry when I was a teenager,” Lehman said. “The youth pastor was an encourager and role model.”

That pastor was one of the people who encouraged Lehman to pursue his interest in becoming a minister. So it was appropriate that when Lehman was ordained as a minister, the service took place at Epiphany Lutheran Church. He was also confirmed there and married his wife, Jean, there.

After 40 years in the ministry, Pastor Jim is retiring this summer from St. John Lutheran Church in Port Clinton. His last Sunday is July 12, with services at 9 a.m.

The service will be broadcast live on St. John’s Facebook page, @saintjohnlutheranpc, and his final sermon and updated readings will be part of the recorded service that will air at 8 a.m. that day on 97.7 FM. 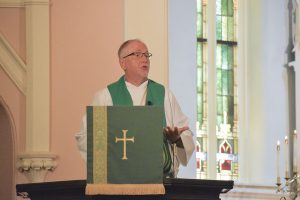 Reverend Jim Lehman at the pulpit of St. John Lutheran Church in Port Clinton giving a recent sermon to the congregation.

Those who are not able to attend the service but want to see Pastor Lehman and his wife, Jean, and wish them well can drive by the church from 11 a.m. to noon on his special Sunday and chat with them from the car.

In his four decades of ministry, Lehman has been pastor at four congregations and earned his doctor of ministry in Biblical Preaching.

He has been pastor at St. John for 18 years, the longest he has been at any church.

“The thing I’ll miss most is the relationships and being part of a Christian community,” he says. “This congregation had always been a strong congregation and a resilient congregation over time.”

During his time here, Lehman led the formation of St. John at the Bay, the church’s ministry on South Bass Island. Its first service was in 2005. Since then, Lehman has regularly taken the ferry or a plane to the island for services.

Other high points have been seeing the congregation’s involvement and generosity in the community. Each Christmas, the church gives its Christmas Eve offering to a local non-profit organization that benefits the community and has been involved in community food drives and a program that provides beds to Ottawa County children who do not have one.

Ministry for the community and church youth also has been successful, with a Summer Day Camp being offered each summer and youth programs taking place throughout the year.

During his retirement, Lehman and his wife plan to spend more time with their children and grandchildren.

“I realized that over these 44 years (including seminary), my family, which obviously has changed in terms of its number over the years, had sacrificed a lot so that I could do what God had called me to do,” he said. “(There were) a lot of things we couldn’t do as a family because of this call. I just felt like I was getting to the point where it was important to me to spend this part of my life focusing on being a better, husband, a better father and better grandfather.”