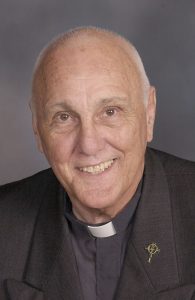 After more than 56 years in the ministry, Pastor Kurt W. Borows has stepped away from the pulpit at Resurrection Lutheran Church on Catawba Island, where he served the parish for 42 years.

His retirement plans include writing a book on The Passion of Jesus Christ, following the last week of Jesus’ life. He will also be spending more time with his beloved wife, Linda, and the rest of his family.

Borows parting words were: “It has been a fulfilling more than four decades, and we have done much together at Resurrection Lutheran Church in the proclaiming of The Gospel of Jesus Christ.”

Borows and his wife Linda are planning to remain in this area to be near family and friends.

During his time at Resurrection Lutheran Church, before his last worship service in January, Borows also served as Chaplain of the Catawba Island Fire Department and performed The Blessing of The Fleet at the Catawba Island Club for several years. He is the author of two published books and for 25 years wrote weekly newspaper articles for the Port Clinton News Herald.

During the last two years of his ministry at Resurrection Lutheran Church, Borows expanded the church with the addition of a larger Narthex area, an architectural element typical of early Christian and Byzantine basilicas and churches, opposite the church’s main altar. Renovations included new offices, a classroom and handicap accessible restrooms.

Borows and his younger brother were baptized at Grace Evangelical Lutheran Church in Queens Village in New York, and were raised in a very devout Lutheran family. Borows said ministry was something he always wanted to do, from the time he was a little boy.

Growing up in Orlando, Fla., he played baseball, participated in school plays and student congress at Edgewater High School, where he hosted two radio programs. In collaboration with a neighboring high school, he helped introduce and rate new records on the air, as well as broadcast sports and news. He was also a member of debate teams both in high school and college.

Knowing his calling was the ministry and leadership he began junior college then attended Capital University and Evangelical Lutheran Theological Seminary, both in Columbus, graduating in May 1964. He interned at Victory Evangelical Church in Detroit, and was ordained June 21, 1964 at Faith Lutheran Church in Orlando, Fla.

Over the years, Borows served as editor for the National Lutheran Church newsletter, was a delegate to six ALC national conventions, and National Park Chaplain in Oregon Cave, Ore.

He led St. Mark Lutheran Church in Roseville, Mich. for two years before moving to St. James Lutheran in Toledo. While with St. Luke Lutheran in Detroit, he taught six college courses of bible study and served as Chaplain of the Detroit Police Department.

Borows moved to Catawba Island and began his service at Resurrection Lutheran Church on Jan. 1, 1978, replacing Erwin Streng. Borows was only the second pastor in the church’s 53 years.

Borows says that one of the most faith-affirming journeys he experienced was six and a half weeks of biblical study in Israel with Dr. Bruce Schein in 1978. His two published books include “Wages of Sin, Gifts of God: Sermons for Lent and Easter based on Romans 6:23,” published in 1993, and “Experimental Catechism”, his doctoral thesis that is only available in seminary libraries.