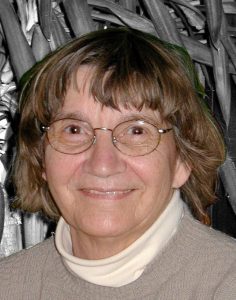 Patricia Traub of Catawba Island died May 3. She was born in 1925 in Detroit in a hospital located within a hotel to June Day (Notley) and Gerald Moran Barton.

She did not graduate from her high school, Toledo Libbey, but gained early admission at Toledo University which was available during the war years. She studied at three universities in four sessions before she achieved a Bachelor’s in Education in 1970 at BGSU. Each admissions office needed to know how she did not have a high school diploma. (She bragged that her college graduating class was very “cool.”)

With her degree she started a career in teaching – mostly third grade at Catawba School. She was amused that after decades of pleading that she was no good at addition or multiplication, she landed in a position where she could sympathize with all the struggling students she led. Pat had an adult-to-adult style of talking and had a little fan club of former students in her old age.

One year as the Volunteer Income Tax Assistance volunteers at Ida Rupp Library helped her prepare the return, they found she understood the ins and outs quite well and recruited her to prepare taxes for the next season. She enjoyed the tax group companionship because it leaned toward the technical side and was not too sissy. She happily related that when they stepped out to get lunch, her colleagues commented on what a fast walker she was (also called by her grandchildren, “Grandma’s mall-walk”). She volunteered with the tax preparers for over ten years.

Pat was an expert seamstress and went way beyond matching the plaids. She made bound buttonholes, rolled hems, and jackets with knitted sleeves or collars, keeping her children nicely outfitted for school. We inherit her first pin cushion: two squares of wool fabric stitched together and stuffed with raw wool, which she threw together under threat of flunking her first sewing class at Bowling Green.

After raising all her children, she eventually got to several countries including: Mexico – where she was a getaway driver from a knife fight in Mexico City; Iceland – where in the famous Reykjavík church, Hallgrímskirkja she took the time to reteach her eldest daughter, Noma, how to correctly tie one’s shoes; Prague, Czech Republic – where she inspired the guard at Staré mesto how to learn the English for, “You have to go around;” and Big Island, Bay of Quinte, Ontario – where she visited her father’s birthplace. She was a good map reader and liked back roads.

With her declining hearing, she took to informing us: “If you’re talking to ME, you’re wasting your breath.” With gratefulness, the Traub family thanks all of her caregivers, pharmacists, nurses, medical staff and doctors and the miracle of medicine for helping her blithely carry on all these years.

Online condolences may be shared with the family at www.neideckercrosserpriesman.com. Neidecker, Crosser & Priesman Funeral Home & Cremation Service is handling the arrangements.