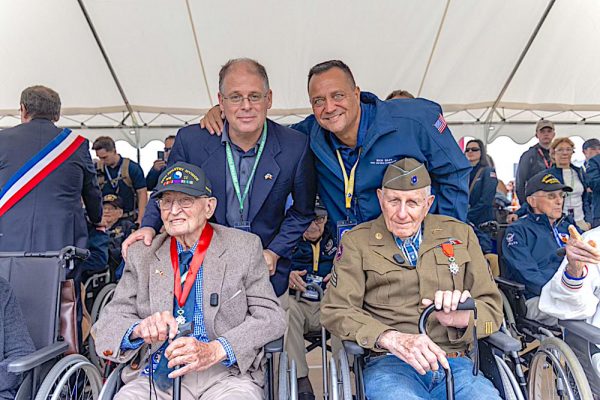 Rich Riley has many reasons to have such a love for the armed forces. His father was killed in action in Viet Nam. He was brought up to believe in the fundamental goodness of his country.

Then, he watched the TV mini-series “Band of Brothers,” that depicted the experiences of the 82nd Airborne Division’s infamous EZ Company. A Community Relations executive with University Hospitals in Cleveland, he was moved to dedicate a major portion of his life to learn about the real-life men who sacrificed so much beginning on June 6, 1944 . . . D-DAY!

Two weeks ago, as part of his passion for World War II veterans. Riley found Robert “Bud” Sabetay of Akron and accompanied him back to a place he could never forget . . . the beaches of Normandy France. Sabetay is 97 years old, and came ashore as part of Operation Overlord, the invasion of Europe that ultimately turned into the beginning of the end for Nazi Germany’s occupations of several countries.

Rich Riley went to Port Clinton High School in the mid-1980s. His mom, Joanne (Yurista) Riley married George Branco after losing her husband. He grew up on Catawba and was a pretty normal kid. He was a bartender at the Roundhouse Bar on Put-in-Bay during his college summers. Tall and handsome, Rich absolutely looks like the All-American boy.

Then he watched the story of EZ Company, and it literally changed his life.

Riley made trips to visit and learn from the men depicted in that TV mini-series. He found Major Dick Winters in Harrisburg, Pa. He attended some of their reunions all over the country. He was determined to honor their service and sacrifice. Riley came home several years ago to serve as the featured speaker at Port Clinton’s Memorial Day observance at Veterans Park.

He hooked up with the “Best Defense Foundation” to find funding for opportunities to do homage to the ever-smaller group who fought in World War II. He and Sabetay hooked up a couple of times and they hit it off.

“I feel like we’re best friends already,” said Riley, who was shown on Cleveland TV wearing a “Don’t Give Up The Ship” T-shirt at the airline gate. “It was an honor of a lifetime to experience that with people who are heroes to you.

“The Best Defense Foundation has been sending our veterans back to the battlefields not just in France, but in Belgium, Germany, Pearl Harbor and Iwo Jima,” says Riley who served as a guide for his new best friend, Bud Sabety, on their trip. “Their generation gave so much and to go back and experience this firsthand with these heroes is an opportunity of a lifetime. It’s humbling beyond description.”