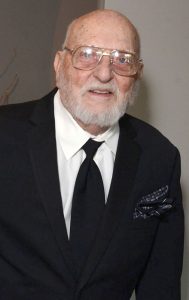 The fifth of six children, Paul was born on the family farm outside of Elmore, on March 26, 1926 to David F. Loertscher and Louise A. (Bodeman) Loertscher.

He was a 1944 graduate of the former Harris-Elmore High School. He was President of his senior class and Captain of the basketball team. He lettered in basketball and track & field.

In August of 1944, after graduation, Paul enlisted in the US Army Air Corps. He was based at Patterson Field; assigned to the Military police and also worked as an aircraft mechanic. He left the military in Nov., 1945. He was a decorated veteran with a good conduct metal and a Honorable discharge for serving his country during WWII.

After his military service he married the former Audrey Beck, daughter of Ervin Beck and Luella (Rauch) Beck, on Jan. 21, 1948. They had three children; Diane (Loertscher) Reif, Linda Loertscher and Annette (Loertscher) Pointer.

Since 1950 Paul was a longtime member of St. John’s Evangelical Lutheran Church in Oak Harbor. He was a lifetime member of the American Legion. Being the Harris-Elmore Alumni Banquet organizer and speaker for his graduation class of 1944, he was always the hit of the affair with his jokes, storytelling and comedic ways!

Everyone who knew Paul loved him! He was always the center of attention wherever he went.

Paul spent his remaining 7 1/2 years of life with his daughter, Annette and son-in-law, Coye Pointer in Scottsdale, Arizona.

Paul will be deeply missed by his five caretakers; Ajia, Sarah, Dawn, Linda and Martin, as well as the legacy of friends he had made throughout his life. Paul touched everyone’s heart whom he met during his journey. To know him was an honor, he will be greatly missed by all.

As Paul would sing daily:

A service celebrating the lives of Paul and Audrey will be held in the Spring of 2021 in Oak Harbor, time will be announced later. Crosser & Priesman Funeral Home & Cremation Service, Oak Harbor, is assisting the family with arrangements and encourages those wishing to send a condolence or share a fond memory to visit: www.crosserfuneralhome.com.

A service celebrating Paul’s life will be held in the Spring of 2021 in Scottsdale, Arizona. The date, time and place will be announced later.