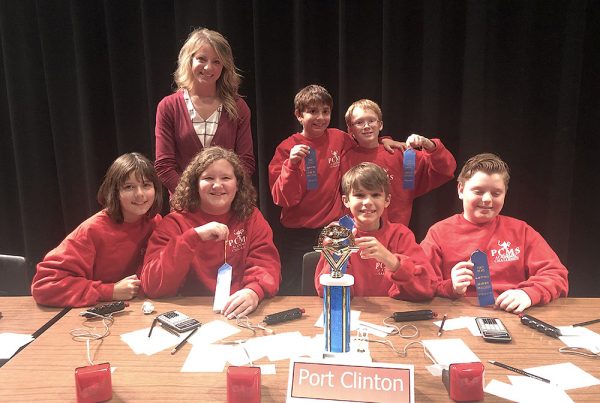 The Port Clinton Middle School Fleet Six Academic Challenge Team are the Ottawa County Champions. The team consisted of Noah Fitt, Eva Klimentov, Alex Hill, Kai Weit, Isaac Apple and Rylie Case. PCMS Academic Challenge Advisor Kerry Fial said “They had a blast, buzzing in and confidently answering any and all sorts of difficult trivia questions.” They will advance on to the Champions of Champions match at BGSU in December.

PCMS grades seven and eight Academic Challenge teams competed against area schools for a chance to advance on to the next tier of competition at BGSU in December. The grade eight team of Bryce James, Max Lucas, Chase Marlatt and Carson Miller put up an awesome fight to place runner up.

“They had to be experts in the field of ancient spices, the digestive system, and pioneers of space among many others. They certainly had a blast during the Major League Baseball round,” said Fial said. The grade seven Academic Challenge team included Camiah Baker, Ava DeFrietas, Quinn Felbinger, Sam Roberts and Kayden Thebeau.