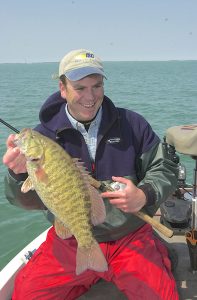 Tournament bass anglers like fishing the Pelee Island area for the chance to land the largest smallmouth bass of their careers. Joe Balog of DeLands, Fla., has won Lake Erie tournaments with trophy fish like this one that he landed and released in the Pelee Island area. (Photo by D’Arcy Egan)

The Pelee Island area has been a favorite for tourists and sportsman for decades. Many Ohioans even call it home, heading to their summertime homes and cottages there every year.

Not this summer, reports Pelee Island Mayor Ray Durocher. Only essential U.S. commercial travel is allowed to the island, and all of Canada, through June 21. New reports from Canada have government officials ready to extend the ban on non-essential travel across the border until the end of July.

“That has made things very quiet here,” said Durocher, in an email message. “There have been no cases of COVID-19 on Pelee Island to date, and there is very little open yet.”

The Pelee Island Ferry is still making trips to the island from the Ontario mainland, but not the usual summer ferry trips from Sandusky, or flights there from Port Clinton on Griffing Flying Service.

The ban also extends to boaters and anglers visiting Canadian waters to catch walleye, smallmouth bass or yellow perch, a common summer pastime in those productive waters for Ohio sportsmen.

Pelee is the biggest island in Lake Erie. At 16 square miles it is about four times the size of Kelleys Island in Ohio waters, the second-largest island. While several thousand tourists and non-resident homeowners, many from Ohio, usually head to the island in summer, there are only about 300 year-round residents.

It is the first time since Canada became a country in 1867 that the U.S.-Canada border has been closed, except for essential commercial travel.