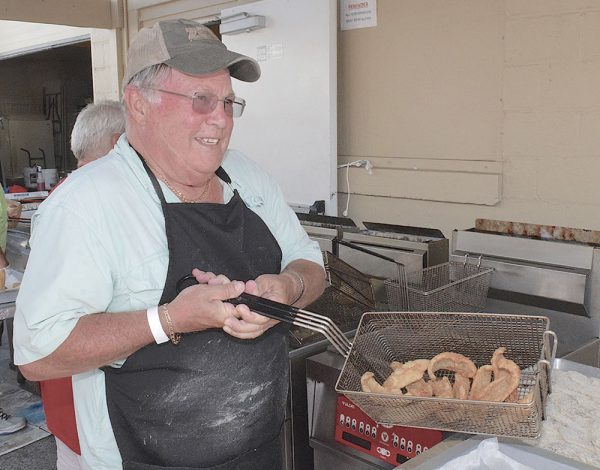 A highlight of the Labor Day Weekend is the annual Knights of Columbus perch fry, with Chef Denny Bergeman’s golden brown fillets of yellow perch providing the much-anticipated dinners and sandwiches.

Plans are underway for the 16th annual Perch, Peach, Pierogi and Polka Festival to be held at the Knights of Columbus Hall, in downtown Port Clinton at 109 E. Perry St., over the Labor Day Weekend. The fun-filled popular weekend on Sept. 3-5 is a three-day weekend offering fine food, dancing and merriment from 4-9:30 p.m. on Friday and from 11 a.m. until 9:30 p.m. on both Saturday and Sunday.

Admission to the festival is $7, or $18 for the entire weekend. Everyone under the age of 18 is free. The K of C facility is protected from the elements and will continue rain or shine.

The popular yellow perch sandwiches and dinners will be served along with pierogies and delicious peach pie with Toft’s ice cream. Polish sausage sandwiches will also be available. Soft drinks, adult beverages and ice cold beer will be sold in the beer tent.

All food items are also available at the carryout.

The lineup of polka bands under the K of C Tent is legendary, and will be launched by the famed Frank Moravcik Band from 5-9 p.m. on Friday. Based in Cleveland, the Frank Moravcik Band was formed in 1995. The main emphasis of their music is on the “Cleveland Style” of polka music. However, they are known for their ability to perform a wide variety of different styles of polka music and popular dance tunes.

Moravcik and the band have been honored by various organizations including the National Cleveland Style Polka Hall of Fame. The band has been the recipient of the Best New/Young Band Award from the Polka Hall of Fame and has received numerous nominations in categories of Band of the Year and Album of the Year.

Over the years, Moravcik has hosted a number of bus tours and performed with the band on cruise ships. His music has taken him to venues around Ohio, Pennsylvania, Louisiana, Missouri, Florida, Indiana, Kentucky, Michigan, New York, Minnesota, Texas, and Washington, D.C. Internationally, he has performed in Canada and the Netherlands.

New to this year’s festival are Saturday performers the Kordupel and Culkar Band from Noon to 4 p.m., another one of the leading bands from the Cleveland area. They specialize in polka music, as well as a large variety of American favorites. The band has been around for over five years and is growing in popularity.

They have performed at various dance halls, dining rooms, private parties, and festivals throughout Ohio and Pennsylvania. In 2019 the band was nominated by the Cleveland Style Polka Hall of Fame for the Band of the Year and Recording of the Year.

The Eddie Rodick Orchestra returns for the sixth time to close out Saturday’s polka party from 5-9 p.m. Rodick has been wowing audiences with his unique, exciting accordion playing for more than 40 years, accompanied by outstanding musicians and vocalists.

Rodick has been awarded the Lifetime Achievement Award for the National Polka Hall of Fame, and his orchestra was named the Band of the Year in 1990, 2002, 2007 and 2008. Their album, “Polka Sweethearts,” was the winner of the 2007 Recording of the Year. The orchestra has played throughout the United States, Spain, Holland, Canada, and Mexico.

Highlighting the weekend music will be the Del Sinchak Band from Youngstown, Ohio, playing Sunday from Noon- 4 p.m. The band has seven successful releases on the award-winning Peppermint label. The National Cleveland Style Polka Hall of Fame nominated four of these albums for the Album of the Year.  The National Academy of Recording Arts and Sciences nominated its “Let the Sunshine In” album for a Grammy Award for the Best Polka Album in 1999.

In 2005, their album “Polkapizzazz” was also nominated for a Grammy. Sinchak is a member of the National Cleveland Style Polka Hall of Fame and in 2009 he received a Lifetime Achievement Award. This group has won the hearts of thousands of polka fans with their energetic live performances, and has played at the Perch, Peach, Pierogi and Polka Festival every year.

Rounding out this year’s entertainment will be the Duane Malinowski Orchestra. They will perform on Sunday from 5-9 p.m.  Based in Toledo, the orchestra a top attraction for 30 years, After spending the last 15 years playing locally in the Michigan and Ohio areas, it has taken to the road once again.

Even though Duane Malinowski has recorded a couple of great country CDs in Nashville, Tenn., he has always stayed true to his Polish heritage. His latest release “Through the Years – Two Sides of Duane,” has received rave reviews around the country. Like all the other bands, Malinowski and his group have performed throughout the United States, on cruise ships, and internationally.