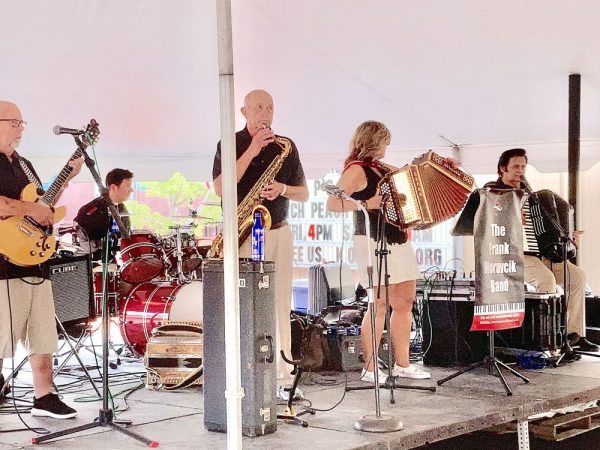 The Frank Moravcik Band was just one of the many award-winning polka bands playing under the Knights of Columbus tent for the crowd of revelers. (Photos by Phil Wheeler) 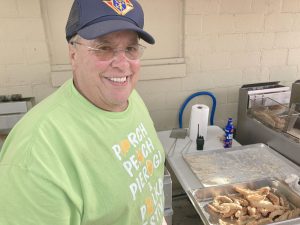 Jim Bergman is the man in charge of the fryer, cooking up tasty treats of deep-fried, golden brown yellow perch.

More than 1,100 pounds of yellow perch, 900 pounds of french fries, and 50 pounds of sausage were cooked just right over three days, reported an army of diners and dancers. One hundred cases of pierogi, each containing 158 individual pierogi – that’s 15,800 —were served. Pierogi, pronounced pyeh-rroh-ghee, are a Polish filled dumpling.

Most visitors remembered to leave a little room for the peaches. There were 130 peach pies and 33 gallons of Toft’s peach and vanilla ice cream dished out.

Close to 300 workers were involved in putting on the popular end of summer event.

“There were seven shifts of volunteers, requiring 60 jobs per shift,” said Arnold, “This is much more than a fundraiser, although all of the funds go to support local charities.

“The three-day party really heightens an awareness of the Knights of Columbus, with 90% of the people arriving from out of town. We had people coming from as far away as Pittsburgh, Toledo, Detroit, Columbus, Virginia, West Virginia, Kentucky, Indiana and even California.”