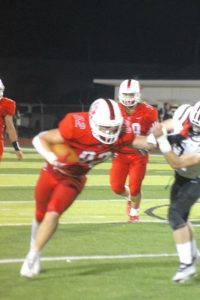 The last two seasons had ended badly for the Sandusky Perkins Pirates football team. They were good enough to make the state playoffs, but not good enough to move on after the first round.

The reason? The Port Clinton Redskins.

Perkins’ junior quarterback Logan Lesch and sophomore wide receiver Jaylen Collier made sure a little payback was in order. And did they ever deliver!

Lesch passed for over 300 yards and six touchdowns, all in the first half. Collier was on the receiving end of four of those TD passes, as the Pirates rolled to a 42-0 lead by halftime.

Redskin quarterback Cam Gillum, who threw for 35 touchdown passes himself last season, had issues. And not necessarily with the Perkins defense. On several key pass plays in the first half he was on target but the ball either bounced off his receiver’s chest, hands or went through them. It was a frustrating night.

The Redskins were playing with a couple of two-way starters out with injuries. Dagan Meyers and Gabe Koskela were ruled out prior to the game. Ethan Ranzenberger and Owen Auxter suffered game ending injuries in the first half, while Samari Smith played but wasn’t 100% physically.

Perkins is now 3-0 on the season, while the Redskins fell to 1-2. In an unusual turn of events, they will not play Toledo Bowsher at home next Friday night due to facilities problems at Bowsher.