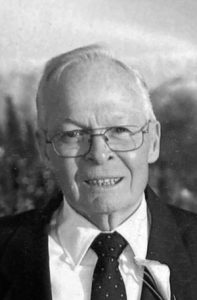 Philip Baker Singer, 93, of Catawba Island Twp, passed away on Monday, Jan. 24, at Magruder Hospital in Port Clinton. He was born on November 12, 1928 in Warren, the son of the late Bigler and Emma (Helwig) Singer. On June 29, 1968, he married Suzanne Allan.

Phil graduated from The Ohio State University with a Bachelor of Science in Education. After a brief stint as a High School history teacher, Phil worked in the machine and manufacturing business, eventually retiring in 1993 after 26 years as a sales representative at Van Dorn Demag in Strongsville.

Phil devoted his life to Family, Sailing, Skiing, and Barbershop Singing, which he embraced with equal parts hard work and good humor.

During Phil’s younger years he joined the Boy Scouts and earned the rank of Eagle Scout. This is where he learned to sail, which would become a lifelong passion. After enrolling at Ohio State, he joined the Sailing Club. Phil’s first boat was a “Thistle” class sloop, which he raced out of Northeast Yacht Club in Cleveland. After retiring, Phil moved to Catawba and sailed a variety of cabin cruisers out of Harbor Park Marina, and Middle Bass Island Yacht Club.

In winters, Phil took up skiing, eventually building a cabin in western New York for family ski trips to Cockaigne. When the kids were old enough, the family started taking ski trips to Colorado, and in retirement purchased a condo in Frisco, Colo., where Phil and Sue spent winters skiing at Breckenridge.

Like many of his brothers and sisters, Phil grew up singing in choirs, and would be an active member of many church choirs throughout his lifetime, most recently at Trinity United Methodist Church in Port Clinton. His love of music led him to barbershop singing in both quartets and choruses. He was a member of the Barbershop Harmony Society for 61 years, most recently with the Fostoria Lake Plains Chorus. He especially enjoyed going to Middle Bass Island for the Barbershop Quartets Weekend held annually over the second weekend of August.

Phil is survived by his wife, Suzanne; sons, Douglas of Brooklyn, N.Y., and Ted and his wife Heather of Lakewood; sister, Ann Luketic of Newton Falls; and several nieces and nephews, as well as great nieces and nephews.

A Celebration of Life Gathering will be held at Trinity United Methodist Church of Port Clinton on Saturday, Feb. 5, with visiting hours from 11 a.m. Pastor Warren Brown will officiate a service at 12 p.m. A light lunch will follow.

In lieu of flowers, the family suggests memorial donations may be made to the Barbershop Harmony Society (https://www.barbershop.org/donate), Trinity United Methodist Church (https://trinityportclinton.org), or your favorite charity