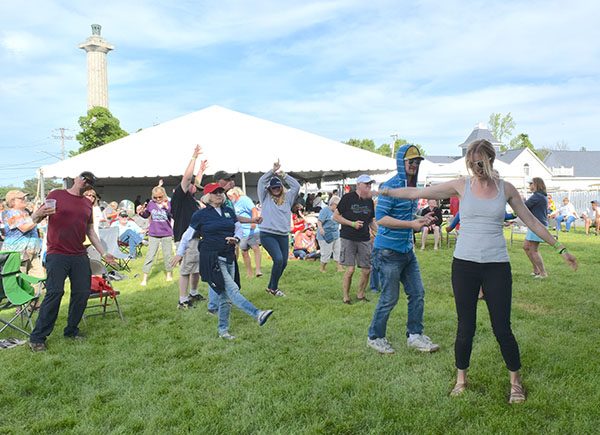 There was a lot of dancing on the green grass at Saturday’s Put-in-Bay Musical Festival at Perry’s Victory and International Peace Memorial. The Kris Langer Band had the crowd on its feet with its classic rock and blues. (Photo by D’Arcy Egan)

It marked the end of this year’s soggy, cool spring, and welcomed crowds of visitors who were ready to revel in an island summer. Many came for the stellar lineup of bands providing an afternoon of entertainment at the Put-in-Bay Musical Festival at Perry’s Victory and International Peace Memorial. They quaffed a few refreshments, danced on the grass and snacked at Rosie’s Bar & Grill food truck.

Popular Put-in-Bay balladeer Bob Gatewood was the emcee and kept the sweet sounds coming all afternoon. Few Miles South dazzled the country fans, Kris Langer Band had everyone on their feet. Gatewood wrapped up the show with his “Friends of the Bay,” the official Put-in-Bay anthem.

A gang of paddlers had taken over the South Bass Island State Park for the weekend, arriving\ for the 15th annual South Bass Island Kayak Rendezvous organized by Eric Slough, a familiar kayaker around Lake Erie and the Great Lakes. Hundreds of paddlers enjoyed a pot luck dinner, visits to the local bars and restaurants, and paddling the lee side of a South Bass Island that tempered a brisk nor’easter.

The Downtown Harbor was filled with sailboats participating in the prestigious Invitational Mills Trophy Race, which included an overnight leg from Toledo to Put-in-Bay. It put the sailors in perfect position to kick back and enjoy the nearby concert.

Delaware Avenue’s bars were bristling with visitors, and a minor gridlock of golf carts. Adventurous drivers raced past the Perry’s Monument on the flooded road, splashing all the way as record-setting high water on Lake Erie dampened boat docks and low-lying areas.

The high water will be around for a while, but Congresswoman Marcy Kaptur is ready to protect the iconic harbor. She has introduced legislation that will begin a $30 million project to rebuild the seawalls protecting Perry’s Monument that are on a low point of the island.

Racing around the island were teams competing in Season 7 of The Amazing Island Raise, Put-In-Bay Style. A benefit for social agencies Ottawa County CASA in Port Clinton and Joyful Connections in Oak Harbor, on Saturday the teams solved clues, completed challenges and won great prizes, all while enjoying the fun and sun of Put–In-Bay.

There was no lolly-gagging by the Miller Ferry crews, who efficiently covered a bumpy Lake Erie all day long to make sure many thousands made it to “The Bay,” and back to the mainland again after a sunny day on a spirited island.