Player of the Week: Gillum starts the season off on right foot

After having some growing pains last year as a sophomore quarterback, Cam Gillum was expecte 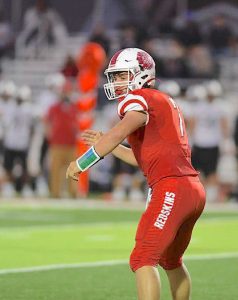 d to take the next step as a junior. If his performance in Port Clinton’s 49-44 win over Bellevue in week one was any indicator, he could be in for a great season.

For his efforts, Gillum is The Beacon’s Player of the Week.

In the win over Bellevue, Gillum completed 15-of-24 passes for 221 yards and five touchdowns with an interception. His favorite target was Josh Hurst, who caught four passes for 89 yards and three touchdowns.

“I had some struggles early on with the pick-six and a fumble, but I was able to settle in and find our receivers, who were open all night,” he said.

Gillum put in a lot of work in the offseason to prepare himself for Friday nights. He was coming off a season in which he completed 97-of-163 passes for 1,425 yards and 13 touchdowns and six interceptions.

“I did a lot of throwing off a good base while moving my hips around and aiming them at the target, which is still something I continue working on,” Gillum said.

He talked about what it will take for the team to be successful this year.

“We have to keep working hard, be balanced offensively and execute on both sides of the ball.”