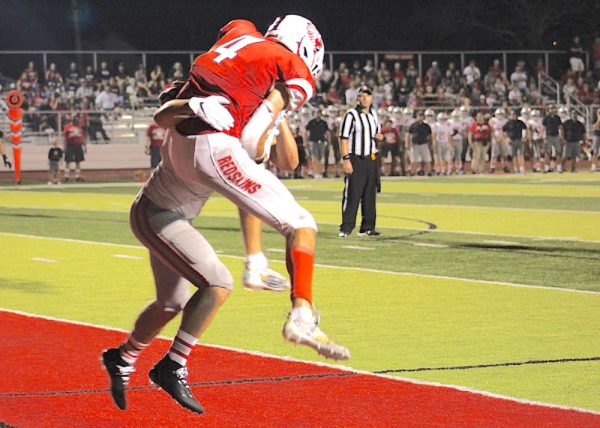 In a short season that has seen Port Clinton rally to defeat two quality opponents, Josh Hurst has been front and center in each of the Redskins’ comebacks.

Port Clinton came back from an 18-0 deficit against Bellevue to defeat the Redmen, 49-44, in week one and was on the wrong side of a 14-7 score before rallying to beat Rossford, 40-14, last Friday.

In two games, Hurst has caught 10 passes for 170 with six touchdowns. He also returned an interception for a touchdown in the win over the Bulldogs.

For his efforts, Hurst has been named The Beacon’s Player of the Week.

“I had high expectations for myself coming into the season,” he said. “I definitely feel I’ve played higher than them.”

Despite being 2-0, Hurst knows the ‘Skins can play better.

“While our record is 2-0 and I think we’ve played really well, our best football is still ahead of us. We haven’t even scratched the surface of what we can do,” he said. “We’ve shown we have big-play talent at receiver and a quarterback who can sling it, but we haven’t been able to find a rhythm running the ball, which is very important if you want to win an SBC championship and make a deep playoff run.”

His quarterback, Cam Gillum, has thrown for 529 yards with 10 touchdowns and two interceptions, and has done a magnificent job of moving around in and out of the pocket and creating opportunities for his receivers. Hurst’s fellow receiver, Tyler Webb, had a great game against Rossford, catching five passes for 155 yards and two touchdowns.

Last season, Port Clinton ended the season in the second round of the playoffs and it left a bad taste in its mouth. The ‘Skins lost, 46-20, to Van Wert, which won the Division IV state title.

“We felt like we were them talent-wise,” Hurst said. “A bad start held us from winning the game. But seeing a team who we were similar to win a state championship made us realize how much potential we had and it made us that much hungrier going into this season.”