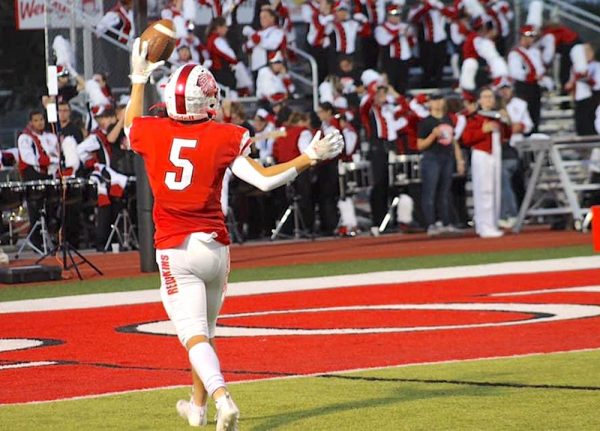 Tyler Webb has had a very good season.

He was nearly named the Player of the Week two weeks ago, but after his performance in Port Clinton’s 61-12 win over Toledo Bowsher, the senior finally earned that distinction.

Webb caught three passes for 42 yards and a touchdown and also scored on a 41-yard touchdown run. He also intercepted a pass on defense.

“I thought I played pretty good. I had a couple of plays I could’ve turned into more yards,” said Webb. “I feel like I could’ve broken a couple more tackles. I almost broke off one that almost went for 65 yards, but they called me out.”

The Redskins dominated in all facets of the game.

“I don’t think we have played to our full capacity yet, but everybody came in and did their job. It was more of a complete team win than we’ve had yet,” Webb said. “I feel like we were out there having fun and enjoying the moment.”

It was an important win following the 21-20 loss to Perkins in week three.

“We came out and didn’t play to the best of our ability against Perkins. We had to come out and get on the right track. We dominated the whole game,” Webb said. “It’s big to be able to bounce back from our losses. It was a very humbling loss. That just made us more motivated in practice. It’s not fun to lose, but you can take things out of that loss, and we did.”

Like many people, Webb has high expectations for this team.

“I think we can be really good. I’ve never played with a group of guys that have as much heart,” he said. “We’ve got weapons everywhere — Cashes Jackson and Colton Yarbrough, and I don’t think we’ve seen the best out of Garrett Cornell and Adam Thorbahn.

“Once we’re all playing at a high level, it’s going to be hard to stop us. We don’t want to be satisfied. We have guys everywhere. I see it in practice every day.”