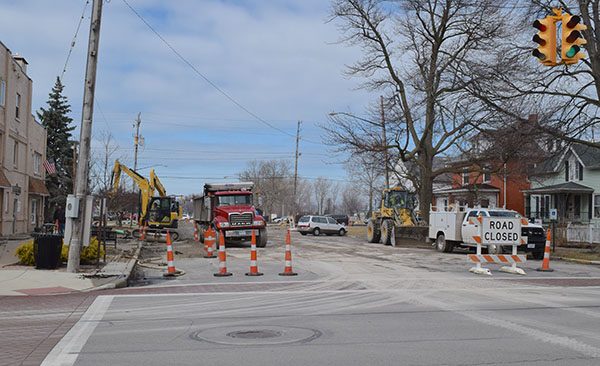 The City of Port Clinton Infrastructure Improvement Project is a “concept plan” for a major renovation of the city’s stormwater and sanitary lines and streets, rather than a piecemeal repair over many years of the streets most in need of attention. (Photo by D’Arcy Egan)

Jack A. Jones of the Poggemeyer Design Group in Bowling Green, Ohio captured the attention of Port Clinton City Council at its meeting last week, and for a good reason. Jones outlined a “concept plan” his company believes could beautify the city, separate antiquated sanitary and stormwater lines, fix the city’s beleaguered streets and, in the long run, be affordable.

With a cost that ranges from $12.976 million to $19.25 million, Jones said it would make a major difference for Port Clinton residents.

Port Clinton Mayor Mike Snider and Poggemeyer Design Group officials emphasized the City of Port Clinton Infrastructure Improvement Project is a work in progress, a “concept plan” that by no means will fix every problem in the city, such as historic Lake Erie high water problems.

“First, we want to give the ‘concept plan’ to the people of Port Clinton,” said Snider. “We need to be in agreement well before we put it to a vote.”

“To address what needs to be done to fix all of the properties of the city would add up to $60 million to $80 million,” said Jones. “That is significant and beyond comprehension.”

“Poggemeyer has been studying the viability of such a concept plan that puts the infrastructure issues into one major project,” said Snider. “Before any decisions are made, we will have public meetings to find out if it makes sense to our residents.”

Jones said after city officials and residents thoroughly talk about the “project concept,” the next phase would be the “funding concept.”

The U.S. Department of Agriculture (USDA) has grants and loans for the type of construction Port Clinton needs to separate sanitary and stormwater lines that are now combined under the city’s streets, said Jones. That would include paving the streets of Port Clinton, an important part of the massive project that would require 12 to 24 months of construction.

Port Clinton’s older streets, as residents know, are in poor shape.
“About 85% of the city roads technically should be rebuilt,” said Jones. “There are actually still some wooden water lines in use, which were most likely installed after the city was founded 191 years ago.”
Because of a buildup of chemicals and residue over the years, the diameter of those lines is only about two or three inches. Once the storm sewers are separated, the water can go where it is supposed to, which is into Lake Erie, while sanitary sewer flows are handled by the sewage treatment plant built in 1999.

The EPA wants all cities that have combined lines to solve that problem. The USDA recently awarded the Village of Oak Harbor $6.73 million — a $2.9 million grant and a $3.83 million loan — a few weeks ago to separate its water and sanitary lines.

Jones said Poggemeyer met with the USDA three months ago and was assured the city’s income, size, population, water and sewer rates would make it eligible for loans and grants covering as much as half of the $19.25 million costs. Interest rates are low right now, in the 1.5% to 4.0% range.

With the Port Clinton infrastructure deteriorating rapidly, and construction costs continuously going up, a project that addressed just three or four streets would cost $5 million to $7 million.

“There are 31 miles of pavement in the community that need to be replaced,” said Jones. “Working together to fix the infrastructure and the streets would benefit the community.”