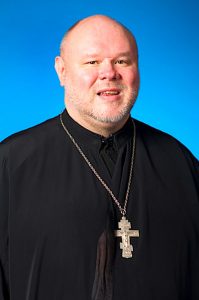 Father Andrew, as the affable Archpriest is known to all, will now lead St. John the Baptist Orthodox Church in that city. His last service in the Marblehead church was Sunday, Nov. 27 at 9:30 am.

Father Bartek grew up in Bridgeport, Conn., where he dreamed of one day becoming an Orthodox priest. He recalls as a young child pointing at the parish priest conducting a service at his family’s church, and saying, “I wanna do what he does!”

His journey to the priesthood began when he first attended seminary in the 1980s, but what was initially going to be a short hiatus from his religious studies stretched into years. His life took a different turn and he attended college, getting degrees in psychology, business administration, and public administration.

He soon was working at hospitals and in restaurants. During this time, the future Father Andrew continued serving the Church, serving as a diocesan camp counselor, choir director and cantor.

Still, the call to the priesthood never left him.

Returning to seminary, he graduated from Christ the Savior Seminary in Johnstown, Pa., in 2005 and was ordained a priest in the American Carpatho-Russian Orthodox Archdiocese. His first assignment was as rector of St. John the Baptist Orthodox Church in Hawk Run, Pa., a small town in the center of the state. He then served as Dean of Students at the Seminary, then as rector of St. Nicholas Orthodox Church in Scranton, Pa.

In 2007, he was selected to be a diocesan delegate to the International Youth Conference at the Ecumenical Orthodox Patriarchate in Istanbul,Turkey.

When the previous rector at Marblehead’s Holy Assumption Orthodox Church, the Very Rev. David Lis, retired from the priesthood in 2017, he recommended Father Bartek as his replacement.