The petite but unique 19-acre Lakeside Daisy State Nature Preserve on the Marblehead Peninsula will soon enjoy a major expansion. The Ohio Department of Natural Resources (ODNR) Division of Natural Areas and Preserves announced Monday that Ohio will purchase another 118 acres adjacent to the popular preserve to create a much larger 137-acre preserve.

For people interested in seeing the Lakeside Daisy in bloom, a public hike has been scheduled at Lakeside Daisy State Nature Preserve, 309 Alexander Pike, Marblehead, for Mother’s Day on Sunday, May 12, starting at noon and lasting until approximately 1 p.m. This will be an excellent chance to see this state endangered flower up close, and prove excellent opportunities for photographs.

The Lakeside Daisy is a tough little flower that only grows in four known locations in the United States. One of those locations is in the old limestone rock quarries found on the Marblehead Peninsula, the only natural population of the Lakeside Daisy remaining in Ohio.

In 1988, Ohio’s Division of Natural Areas and Preserves acquired 19 acres of an abandoned limestone quarry where the Lakeside Daisy grows and is now protected.

The long-lived perennial grows where few other plants can survive, and when you see the Lakeside Daisy preserve, you’ll appreciate how really difficult those growing conditions can be. In early May, the preserve is awash in yellow blooms that will continue through early June.

The preserve is only open during the month of May for visitors to protect the habitat of the Lakeside Daisy.

Acquiring this property will protect more than 700,000 Lakeside Daisy plants. This property will also protect valuable habitat for migratory bird species crossing Lake Erie, such as the federally endangered Kirtland’s warbler, bald eagles and many more.

Funding for this acquisition comes from both a sizable grant from the U.S. Fish and Wildlife Service and donations from Ohioans using their state income tax refunds to support Ohio State Nature Preserves.

The Lakeside Daisy was listed as endangered in Ohio in 1980 and was listed as federally threatened by the U.S. Fish and Wildlife Service in 1988. 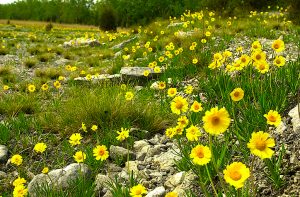 The Ohio Department of Natural Resources will be purchasing 118 acres of land adjacent to the Lakeside Daisy State Nature Preserve, increasing the size of the preserve from 19 acres to 137 acres. Located on the Marblehead Peninsula in Ottawa County, this site is home to the only natural population of Lakeside Daisy left in Ohio.