On a whim I visited Cuba last autumn, hanging out mostly with people fishing in Havana and Santa Fe.

I never fished on that Cuban adventure, but spent a lot of time watching others. Many were hand-lining it. That is, no rod or reel. Just a wooden spool with line, a weight and a hook with a tiny piece of bait.

They’d spin off a length of line, swing the weighted line around and around overhead until they got a good six- or eight-foot arc, then let go. After that, working the line with a finger, feeling ever-so-slightly on the fingertip for a nibble. I passed out 100 or so lures of various types, though quickly realized what I brought wasn’t realistic for most.

Hopefully they traded or sold the tackle for something of value. These guys weren’t fishing for fun, they were fishing for food.

In early March we gathered up a few things and headed south. My son Jordan traveled from North Carolina with a bag of goodies and met me in Havana with spools of line, hooks, sinkers, split-shot and bobbers. I came bearing gifts, too, from folks here. A dozen rods and reels and another bag of gear weighing close to 40 pounds. Four rigs from my excessive collection included.

Catawba resident Mike Dudley is no stranger to angling. When we met up he had a table of six rods, reels and gear lined up for offer in his garage. Three seemed a good fit so I snatched them up. Dudley said that years ago he helped feed a band of hungry hippies in the Florida Keys with the very basics and a tutorial on technique.

“These guys were hungry and they were shoplifting in convenience stores for dinner,” Dudley explained. “I showed them how to fish with just a line and hook, and they started catching fish and were pretty happy about it,” he said. “It was amazing, they really picked up on it and they were catching fish like crazy and in no time they were eating good.”

And it shouldn’t go without mentioning that Julia Fernandes from Young’s Carpet One donated the perfect massive cardboard tube needed to transport the rods to Cuba. The airline, however, was not so favorable, and really put the squeeze on the entire humanitarian angling process. They really frown on 9-foot luggage. I offered up my first-born son in lieu of the pricey $220 baggage fee and they declined. So did Jordan (he always was selfish.) But I paid it and in the end, it was worth it.

“It’s a great endeavor and I’m glad for it,” said Cahlik, whose job on Lake Erie is to lead people to fish, and he earns a living doing it. But he definitely likes the idea of helping people catch fish in Cuba, where for some folks, fishing means eating.

“Fishing on Lake Erie is my livelihood, and I can respect it anywhere. Especially when fishing can mean so much more to a person,” he said. “Not everyone is as fortunate as we are here.”

Can I get an Amen! on this one?

We offered up gear to anglers who didn’t have rods and reels and hooked up a few who had rods but not reels. Line was a big deal and hard to obtain, we learned. In Cuba most anglers aren’t tackle collectors. They’re not interested in the latest lures or patterns or just-released baits, just the basics: rod, reel, line, weight, hook. And line. And more line. Did I mention fishing line is really popular?

Two fellows fishing on the Malecon sea wall in Havana were more than surprised at our meeting. I ventured out alone one morning and had a great conversation with few words, since my Spanish is less-than-ideal. But I got the idea: the fishing was so-so recently and the fish were small.

Even so, I understood the message: Why not try? Yelet and Alberto were interested in the rods and reels, but Cuanto? How much? they inquired as they inspected the items. Gratis, I said — free. Pares ustedes dos — For you two. And they were okay with that.

In the harbor at Old Havana, a half dozen folks fishing on a pier received tackle. Including one fellow who had been fishing with a rod for several years, but no reel. My traveling companions, sons Jordan and Jake, a daughter-in-law from Columbia and her sister, are all Spanish-speakers, so that helped. But anglers the world over can still communicate about catching, releasing, size, weather, bait and everything else relevant to fishing, in our own language with just two hands and smiles and frowns.

Another gentleman we found hand-lining in Havana fishes every day. He was more than glad to upgrade his arsenal. Some of the fish he keeps. The  rest he sells, he told us.

When we parted ways he had a new rod, reel and an extra spool of line.

We caught up with 78-year-old Ramon Castro in Santa Fe, a sleepy village 30 miles west of Havana. On my last visit Castro fished with a stick and 20 feet of line. He’s a wiry, spry fellow who acts like he’s only 50 years old, and animated. He was gracious then and was just as gracious now, as was his daughter Raquel.

We tracked Raquel down first, then walked to her father’s home nearby. Chickens clucking about, lackadaisical dogs lying in the streets, children playing in dusk’s gentle shadows, the subdued sounds of a village settling in for the evening.

We presented our gifts and Ramon was all smiles. It was late, but we walked a long way, including crossing a crumbling concrete bridge with large gaps in it, to the shell of a building that was a gambling casino before the Revolution, around 1958. A tumbledown structure adjacent to Hemingway Marina. We were given bait by a local who was netting sardines. Castro played around with the new gear, mostly insisting I fish. We didn’t catch anything, though some no-good fish stole our baits.

But we spoke at length.

Castro said before the Revolution his grandfather had a farm and cars and everything, though he had instructed Castro to work hard, no matter what. For decades Castro worked as a welder and is now retired. Castro said he fishes, of course to catch fish, but also to get away from the world.

“When I fish I don’t have to think of anything else,” he said. “Just the water and the fish and nothing else.”

And so all’s well that ends well. Though maybe this isn’t over. I am already thinking of another trip. More rods and reels, more line, more tackle. And more line. And our Cuban fishing friends landing greater fish more often. It won’t ever be like fishing for ‘eyes, perch and the like in Lake Erie, but maybe a little bit of giving can make angling a little more productive for as many folks as possible.

And many thanks to those who donated! 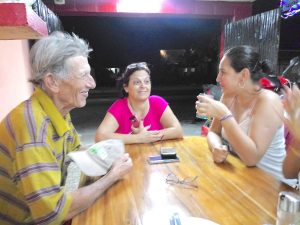 Ramon Castro talks fishing, and life, with his daughter Raquel and my friend Angie Perez after an hour fishing at dusk. (Photos by James Proffitt) 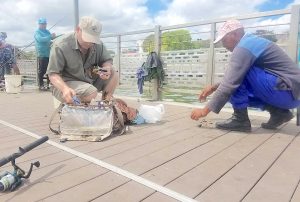 On a dock in Port Havana, anglers received rods, reels and tackle. 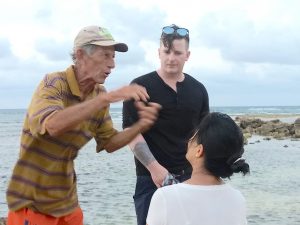 While wetting a line in his favorite waters, Ramon Castro talks about the fishing in Cuba with Jordan and Ginna Proffitt.