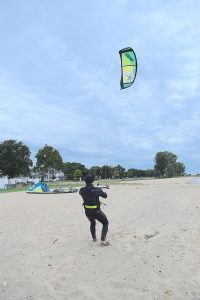 Big winds can chase away the beach crowds, but wind boarding enthusiasts flock to Port Clinton’s City Beach for an adventure on the water when northerly winds arrive. (Photo by D’Arcy Egan)

Repairs are needed at Port Clinton’s City Beach to remove exposed electrical cables, while hot weather and summertime crowds and high Lake Erie water levels have been exacerbating the lack of sand along the shoreline.

Council continued their outdoor meetings at Lakeview Park to allow for social distancing, and the electrical problem was evident a short walk across Perry Street. Erosion has revealed an exposed active electrical cable, which has required barriers to keep beach goers away.

Snider said Ohio Edison will reroute the electric cables that power a nearby pump station away from the beach this fall and the city has allocated $60,000 to repair the east end of the traditional swimming beach to allow it to open again.

Lakeview Park could also see a new enhanced crosswalk to the beach. Port Clinton residents helped to do Ohio Department of Transportation surveys a month ago that were required to obtain state grants for the special “enhanced” crosswalks.

“The surveys showed the busiest cross walk was at the city beach,” said Snider. During the survey, 400 vehicles were counted in one 15-minute span, and 11,000 vehicles over 10 hours. The cross walks at Mr. Ed’s Bar & Grill and Dock’s Beach House on West Lakeshore Drive and at the Jet Express on Monroe Street were also very busy.

Not so busy was the cross walk site at Fremont Road and Portage Drive, near Tru-Lay Stadium, which would nix an enhanced cross walk there.

The U.S. Army Corps of Engineers will return soon to work on the wetlands restoration of Port Clinton’s Lake Erie waterfront, a $1.4 million project to beautify the 12-acre area between Derby Pond in Waterworks Park and the Port Clinton City Beach.

“We have a bunch of phases of the project still to go,” said Safety-Service Director Tracy Colston. That includes removing all of the remaining weeds and invasive species of plants, such as phragmites, this fall and getting ready to plant native grasses and other marshland species next spring.

“Hopefully, the wetlands will be a showplace when the project is done,” said Colston.

Colston also said the $2.8 million renovation of Jefferson Street in downtown Port Clinton is almost finished. The pavement is in good shape now, he said, electric poles are presently being worked on and striping will be next.

Port Clinton City Council had a second reading last week on legislation repealing the city’s support of nuclear energy legislation in Ohio, in wake of a scandal involving Ohio House speaker Larry Householder and others in the passage of HB6. The resolution will get its final reading at the Aug. 26 council meeting at 7:30 p.m. in the Lakeview Park pavilion.

Ellen Greene Bush of Port Clinton and Nancy Gurney of Lakeside were on hand to represent American Promise Ohio, a national network of citizens dedicated to passing a 28th amendment to the U.S. Constitution to end the outsized influence of global corporations, unions, super PACs and other forms of concentrated money in American politics.

Bush asked Port Clinton council to consider a resolution asking Ohio and the U.S. Congress to act on the constitutional amendment.

“Over the past few decades, the U.S. Supreme Court has gradually come to equate unlimited election spending with ‘free speech,’” said Bush. “This is damaging the interests of free debate and free speech for all citizens, as outside money increasingly impacts elections and increases the risk of systemic corruption.”