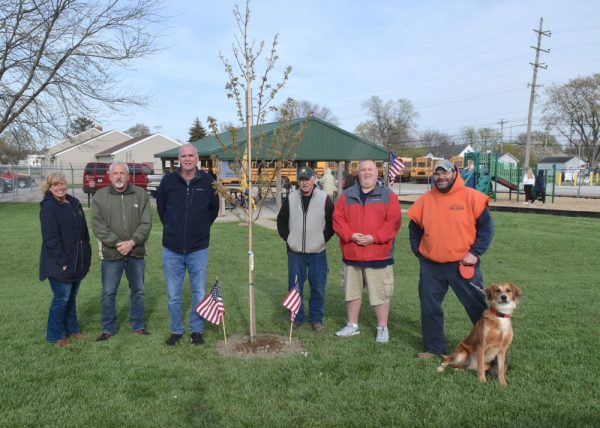 Port Clinton has been a designated Tree City USA for 33 years, and took time out on a chilly but sunny Friday afternoon to celebrate Arbor Day at West End Park. Thanks to the Oliver H. Perry No. 341 Masonic Lodge, the City Tree Commission was provided a Celebration Maple Tree to plant near the park’s shelter house.

The Celebration Maple is a tree that can withstand the northern winters, and provide shade for a legion of kids who picnic and play basketball at the small park.

“This is the 150th Arbor Day, which was first officially proclaimed in 1872 by Nebraska’s Governor, Robert W. Furnas,” said Chairman Larry Holman of the city’s Tree Commission. “Port Clinton has been planting trees on Arbor Day for 33 years, an extremely worthwhile program to both beautify the city and for the environment.”

That was followed by poetry praising trees by Port Clinton City Council’s Lisa Sarty (Treees, Trees, Trees) and Beth Gillman (A Tree) and Tree Commisioner Lisa Bodie (The Heart of the Tree). The closing prayer was provided by Pastor Warren Brown of Trinity Methodist Church.