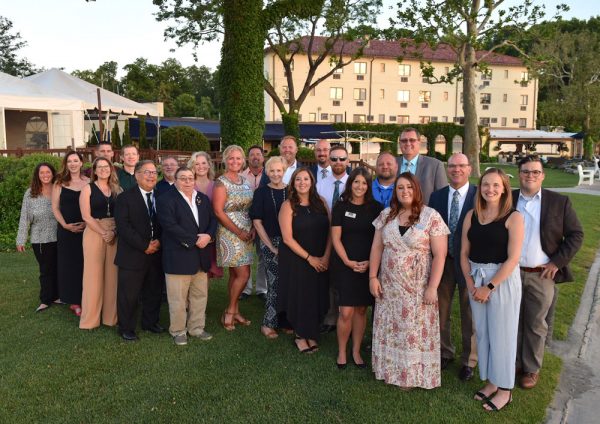 The Port Clinton Chamber of Commerce and the Main Street Port Clinton Executive Boards and Boards of Directors gather for their Annual Awards Presentation at the Catawba island Club. (Photos by D’Arcy Patrick Egan)

The battle to thwart the deadly Covid-19 pandemic around Port Clinton and Ottawa County for more than a year has brought out the best in the local medical industry, according to the Port Clinton Area Chamber of Commerce and Main Street Port Clinton.

Last week at their annual awards and dinner at the Catawba Island Club local voters singled out the staffs of Magruder Hospital and the Ottawa County Department of Health, lauding them for their efforts that included spearheading infection protections and treatment for the virus while recording the top vaccination rates in Ohio.

Magruder is led by President & CEO Nick Marsico and has a team of more than 400 employees, who were given the Business Member of the Year Awards, the most prestigious award awarded by the chamber. Magruder is one of the largest employers in the county. The hospital maintains a strong commitment to patients, staff and the community with its mission of “Improving Lives Together.

Health Commissioner Jerry Bingham and the Ottawa County Health Department were awarded the Light House Award, going to a business that has made an outstanding contribution in its field. Despite not being appointed to lead the OCHD until June 2020, well into the difficult beginnings of Covid-19, Bingham and his experts provided leadership for the general population, as well as county schools and businesses.

General Manager Babs Klacik and her staff and volunteers at Bistro 163 were honored with the Community Service Award for addressing hunger in the community in a unique way. During four months of the Covid-19 pandemic, Bistro 163 created 22,294 free dinners that were distributed as carryout or home delivery to those in need.

For intensely managing the City of Port Clinton in the midst of the pandemic, providing hands-on leadership to protect the population and work to stimulate the local economy with the new MOM Entertainment Stage, Mayor Mike Snider was presented the Outstanding Citizen Award.

The Outstanding New Business Award was earned by The Gristmill, a unique bar in the heart of Port Clinton’s River District. A former gas station, the building was rescued as an entertainment venue by General Manager Brooke Rodwancy and her parents, Don and Terry Rodwancy. It was converted into a trendy downtown bar, complete with the sights and sounds of the city.

Quinton and Donna Smith and their new Gideon Owen Wine Company in Port Clinton received the Beautification Award for the enormous amount of renovation performed on the old Mon Ami Restaurant. Rich in history and equally beautiful, Gideon Owen Wine Company’s renovated Chalet, and Taste, Sip and Drink in Triage Bar — as well as its beautiful orchards and vineyards — have elicited rave reviews.

The Main Street Volunteer of the Year was Lori Madison of the Frederick Agency, who cited the many opportunities to give back to the community by working as a volunteer. The Main Street Business of the Year Award was accepted by General Manager Paul Markus of McCarthy’s Irish Pub.