Wilber recommended council promptly seek applications for the city’s top post. Council agreed, mandating that applications be made by the end of business on Monday, April 1. Applicants did not have to be a city official or affiliated with the city.

Council interviews were to begin on Tuesday, April 2 at 7:30 p.m., just hours after this week’s deadline for publishing The Beacon. When a choice is made, it will appear on The Beacon website and its Facebook page.

While Wheeler did not attend the council meeting, which has not been unusual in recent months, his statement noted his administration had implemented many projects to help  the city move forward over his three and a half years.

“I find myself in a hostile environment at the city level,” Wheeler wrote, “and with several individuals involved with the city. I cannot and will not subject myself or my family to this behavior any longer.”

Council President De Anna Kuzma was appointed interim mayor until Wheeler’s replacement was selected by a council vote. A new mayor would serve the remainder of Wheeler’s term, which runs until the end of 2019. The only mayoral candidate who has filed for the November election is Mike Snider, a Republican and former councilman. Snider, a realtor at Lake Erie Vacation Rentals in Port Clinton, had notified Kuzma he is also making a bid for the remainder of Wheeler’s term.

Also throwing his hat in the ring for mayor on Monday, April 1 was Fourth Ward Councilman Gabe Below. While Kuzma could be the front-runner for the vacant mayor’s seat, as president of council, she had yet to make up her mind.

“It’s way too early for me to consider becoming mayor,” said Kuzma.

“I will say the person who takes the position must care deeply about the community, and I do love this city. Anyone who is interested in becoming mayor should apply.

“I wouldn’t say there has been turmoil (under Mayor Wheeler’s administration), but this city is resilient and its people are resilient. Council is doing a wonderful job and will continue to do a wonderful job. And the city will move forward.”

Wheeler’s his legal troubles did not end with his resignation.

Wheeler was in Ottawa County Common Pleas Court on Monday, April 1 to testify in a trial where service department employee Robert Garcia sought a civil protection order against him. Wheeler reportedly threatened Garcia and his girlfriend Rochelle Stively, in downtown Port Clinton just after the Walleye Drop on New Year’s Day.

Service Director Olen Martin was called to testify in that trial, and told the court he had heard Wheeler’s threat, and substantiated Garcia’s claims.

Martin hired an attorney, and was reportedly trying to decide whether he would sue to get his job back.

After Wilber consulted with Wheeler about his decision to subjectively fire Martin, and risk the possibility of another lawsuit, it was decided it would be best for Wheeler to reinstate Martin, a popular employee who is now back on the job.

The reinstatement returned Martin to his former status, benefits and pay range. The agreement also does not prevent Martin from filing a lawsuit against Wheeler or the city at a later date.

Wheeler and Port Clinton service department employee Garcia were in court on April 1, with visiting judge Robert Pollex of Wood County issuing mutual civil protection order against both Wheeler and Garcia for a one year period. Wheeler and his family were not to have any contact with Garcia and Stively, who are not to have contact with the Wheeler family.

Wheeler, who has an Ohio concealed carry permit, will also be forbidden to have weapons in his possession while the civili protection order in place over the next year. 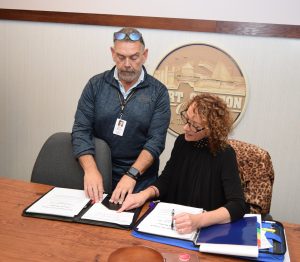