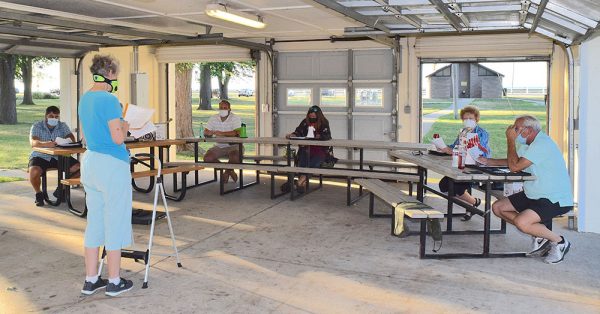 Port Clinton City Council introduced legislation at its council meeting on Tuesday, July 28, to repeal its resolution to support Nuclear Energy in Ohio, a position taken in May 2019 supporting Ohio House Bill 6. 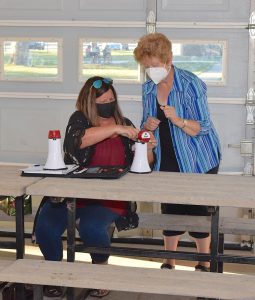 President of Council Lisa Sarty and Third Ward Councilman Margaret J. Phillips power up their new megaphones with batteries before the open air council meeting last week at Lakeview Park. Mayor Mike Snider provided the megaphones so everyone could hear testimony in the outdoor venue. (Photos by D’Arcy Egan)

Pointing to the criminal charges now being filed against Ohio House Speaker Larry Householder as part of a $60 million racketeering and bribery investigation, council wants to repeal that resolution. Council did acknowledge the contribution that employees and contractors of Daves-Besse Nuclear Power Station have made to the community.

In other business, Mary Brown, a Port Clinton landlord, was concerned that Port Clinton had extended the no-disconnect rule for nonpayment of water bills that began in March at beginning of the COVID-19 pandemic.

In Port Clinton, this included shutoff of service for non-payment of the monthly water-sewer utility bill. The Ohio EPA revoked that rule beginning July 12, while Port Clinton extended the non-shutoff notice for utility customers until Aug. 1.

Brown cited the extension as a hardship for landlords. While landlords can charge renters who move for damages, they can’t assess them for utility bills not paid.

“At the very least, I am asking the late fees, disconnect and reconnect fees be waved to the rental property owner,” said Brown. “Port Clinton says it encourages small business. Let’s see some evidence of that.”

Council also introduced legislation on parking requirements in Port Clinton, which were last addressed in 2008. A resolution was introduced suspend ordinances for off-street parking to allow for future parking and zoning requirements.