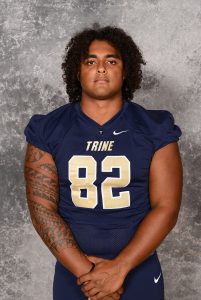 It’s been a gradual process, but Russell DeMarco has finally reached new heights.

Playing for Trine University, DeMarco is now a starter at defensive end after playing sparingly during his first two seasons.

The Thunder are in the midst of another fine season and just broke a school record by winning their 23rd consecutive regular-season game. DeMarco, a Port Clinton alum, has been instrumental in helping Trine get off to a 3-0 start. He has eight tackles and one sack in three games. (Last season, DeMarco had eight tackles and one sack in eight games.)

“I think with any good team, it’s a matter of doing your job. Everyone wants the same goal, no one wants to lose a football game,” said DeMarco. “If you do your job, we’ll win. There’s a great camaraderie that you have with your teammates. If you do your job and he does his, if you have his back and he has yours, you’ll win.”

Trine, which is located in Angola, Ind., was founded as Tri-State Normal College in 1884. The university has a $25 million dollar endowment and is home to 2,200 students at its primary campus (5,100 total). The Thunder compete in the Michigan Intercollegiate Athletic Association, which has eight schools in Michigan and two in Indiana.

DeMarco is currently majoring in marketing with a minor in accounting. He is considering law school upon the completion his undergraduate degree.

As freshmen, DeMarco and fellow Port Clinton alum Darius Daniels made good early impressions on the coaching staff, moving up to practice with the varsity.

“The freshman have their own practice for two weeks, and the varsity has its own practice for two weeks. When I came here with Darius Daniels, they moved us up to varsity. We were the only two freshman to play varsity,” said DeMarco. “When you get to college, you learn new ways to play. Back in high school, I was stronger and faster, so I could overpower people. It’s very humbling coming to college (because) no one cares how good you were in high school. You have to get college good to be good.”

“I never really had a father figure when I was in Port Clinton or anywhere else. Beau understood that I didn’t have that, and with all of the guys on the team, he treated you like you were one of his own,” Russell said. “He made you want to work hard for him. He cares so much, so I needed to care just as much (on the field).”