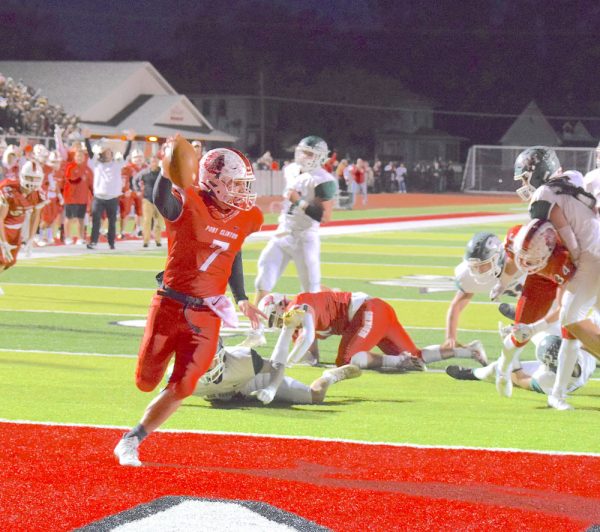 Port Clinton running back Cam Gillum got the Redskins rolling right away in Friday’s rivalry game with visiting Oak Harbor at Tru Lay Stadium, romping 12 yards for a touchdown in the 42-7 victory. Port Clinton captured the Bay Division crown of the Sandusky Bay Conference and will host a playoff game on Friday at 7 p.m. (Photo by D’Arcy Patrick Egan)

PORT CLINTON — Port Clinton was geared up for a chance to win the Sandusky Bay Conference Bay Division title, and the Redskins answered the call, defeating Oak Harbor, 42-7, in the season finale at Bassett’s Field.

“It’s the ultimate goal,” said Port Clinton coach Beau Carmon. “It’s so special to win it in the SBC, which is such a tough league. We overcame a lot. This is a special group of seniors, and I’m very happy for them. It’s hard to put into words what this means.”

It’s the first league championship in five years for the ‘Skins.

Missed opportunities were the story of the game, at least in the early stages, for the Rockets. The game was competitive for much of the first half, and Oak Harbor had its chances to score early.

The Rockets (5-5, 2-3 Sandusky Bay Conference Bay Division) traveled 71 yards and reached the Port Clinton 8-yard-line on the game’s opening possession, but a fumble on the snap on third down was recovered by the ‘Skins. Port Clinton drove 70 yards nine plays, scoring on a 12-yard run by Cam Gillum with 4:58 to play in the first quarter to take the lead for good, and Andrew Hanson’s extra point gave the ‘Skins (9-1, 5-0) a 7-0 lead.

On the ensuing possession, Oak Harbor drove to the Port Clinton 19, but a holding penalty and a sack by Demetrius Skoufos ended the drive.

“We stressed all week that one of the keys for us on offense was to sustain drives and be opportunistic in the red zone,” said Oak Harbor coach Mike May. “We had some opportunities to gain some momentum on our first two drives and get off to a great start, but we didn’t take advantage of them.

“Against a very talented team like Port Clinton, the margin for error is very low. Mistakes like penalties, missed tackles and turnovers can turn into points for them very quickly. That’s what happened to us in the second quarter. They took advantage of our mistakes, and things began to turn in their favor in a hurry.”

The teams traded possessions before the ‘Skins ended the first half on a tear, scoring three touchdowns in a span of 2:59 and seizing control of the game.

Port Clinton drove 72 yards in seven plays and scored on a 1-yard touchdown run by Garrett Cornell with 3:25 to play in the first half. On the previous play, with the ‘Skins facing a second-and-6 at the Oak Harbor 8, the snap was fumbled and the ball bounced around before Cornell picked it up and nearly scored before being taken down at the 1.

A little over a minute later with the Rockets possessing the ball, Cornell intercepted a pass and returned it 41 yards for a touchdown, pushing the lead to 21-0. Then an interception by Skoufos, which was returned 40 yards and came after the Rockets reached the Port Clinton 25, gave the ‘Skins the ball at the Oak Harbor 40. Gillum found Tyler Webb deep on the next play for a touchdown with 36 seconds to play before the half.

“We knew going into the game that we had to limit their big plays. We had to tackle well in the open field and get off of blocks,” said May. “The challenge in defending Port Clinton is that they don’t have a weakness on offense. They can run the ball behind their huge offensive line, their quarterback has also had a record-setting season throwing the ball, and they have the top two receivers in the SBC. It’s difficult to take away everything.”

Now, Port Clinton will host a playoff game on Friday at 7 p.m.

The ‘Skins are seeded No. 4 in the Division IV, Region 14 standings and host Toledo Scott.

“It’s great for the town, for the school, and I’m happy for the kids to participate in a real playoff atmosphere,” said Carmon.

In the third quarter, Hayden Hower caught a 43-yard touchdown pass from Jaqui Hayward to get Oak Harbor on the board and cut the lead to 28-7.

Then Dagan Meyers got into the mix, scoring on an 8-yard touchdown run midway thru the third quarter following the Rocket touchdown, and he later scored on a 1-yard run in the fourth.

Carmon had high praise for Oak Harbor, which has a number of talented underclassmen.

“They run the ball very well. We had to prepare for that, but it’s hard to simulate in practice,” said Carmon. “We knew they’d take some shots down the field. There was no way we were going to run away with it. I think the (first) interception kind of broke it open.

“They’ve got some nice, young players. They’ve got a very bright future.”