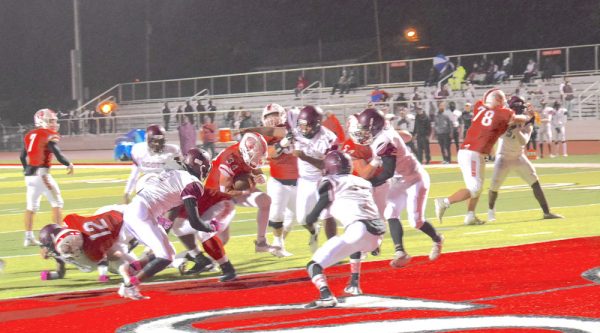 Port Clinton running back Garrett Cornell had some heavy duty line blocking to score the first touchdown of the game for the ‘Skins en route to a 47-0 route of Toledo Scott. Port Clinton hosts LaGrange Keystone next Friday at 7 p.m. at Bassett’s Field. (Photo by D’Arcy Patrick Egan)

PORT CLINTON — Garrett Cornell has been the workhorse for Port Clinton all season long, and it was no different in the Redskins’ 47-0 victory over Toledo Scott last Friday at Bassett’s Field in the first round of the Division IV, Region 14 playoffs.

Port Clinton will now play No. 5 LaGrange Keystone next Friday at 7 p.m. at home.

Cornell carried the ball 16 times for 176 yards and the senior scored three touchdowns to help pace the Port Clinton (10-1) attack. Cornell got great blocking from his offensive line, and his combination of strength and speed made him a load to bring down.

The ‘Skins, ranked fourth in Region 14, drove 48 yards in seven plays on its first drive, handing the ball to Cornell six times. He turned those carries into 43 yards, culminating in a 2-yard touchdown run to give Port Clinton the lead for good at 6-0 with 5:47 to play in the first quarter.

Andrew Hanson kicked the first of his five extra points to push the lead to seven points.

Throughout the game, No. 13 Scott (6-5) failed to get anything going on offense and struggled holding the Redskin rushing attack in check. 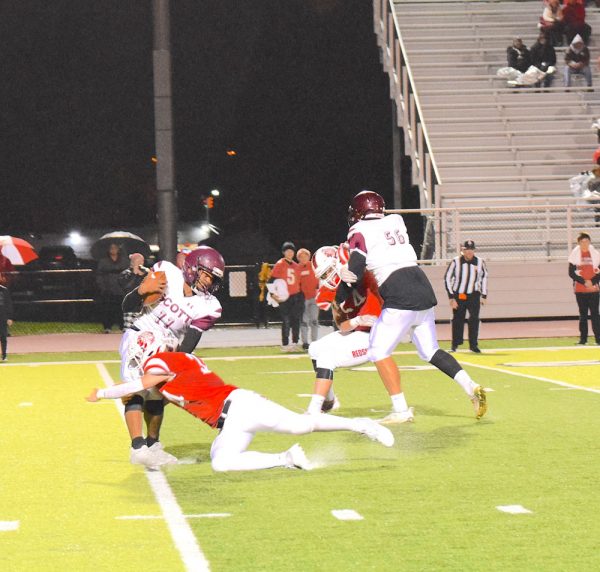 Cornell did most of his damage in the first half, carrying the ball 13 times for 142 yards and two touchdowns.

“He runs hard and he found holes. He’s a power runner and got into the open field,” said Port Clinton coach Beau Carmon. “He’s coming along after an injury (earlier in the season).”

Port Clinton’s third drive started at the Bulldog 28-yard-line following a high snap on a punt. Cornell carried the ball on all three plays, punching it in from 12 yards out for the touchdown on the second play of the second quarter.

Then Josh Hurst caught a 4-yard touchdown pass from Cam Gillum with 4:30 to play in the first half, and the ‘Skins took a 21-0 lead into halftime.

Gillum was terrific, completing 10-of-11 passes for 119 yards and two touchdowns.

“On a night like tonight, you’ve got to be able to run the ball in nasty weather,” said Carmon. “Once we established the run, I wanted to open it up. We have some things to clean up, though. But it was a win.”

It was the third playoff win for Port Clinton. Last year, the ‘Skins defeated Perkins before losing to Van Wert, which won the state championship. The first postseason victory for Port Clinton came in 2016 when the ‘Skins beat Bellefontaine Benjamin Logan before falling to eventual-state champion Columbus Bishop Hartley in the regional semifinals.

The Redskin offensive line, which features three players of at least 280 pounds, opened big holes for Cornell throughout the game. Ethan Ranzenberger and Gabe Scott are the tackles, though Fischer Mominee started in place of Scott. Hunter Shell and Samari Smith are the guards and Dylan Snyder is the center. 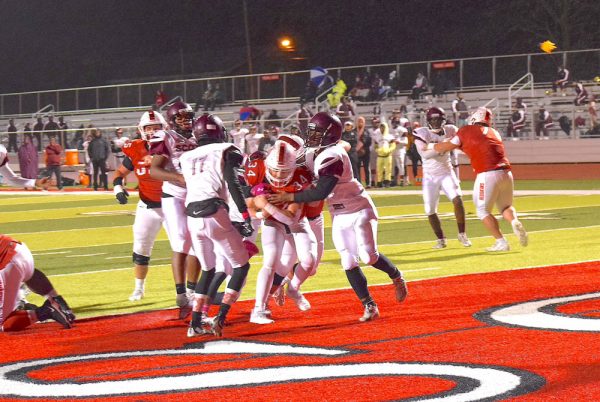 Port Clinton’s interior line had a lot of success creating running room for running back Garrett Cornell (34), allowing him to score a trio of touchdowns. (Photo by D’Arcy Patrick Egan)

“I don’t touch the defense. Assistant Coach Phil Fought does the work,” said Carmon. “This is the best defense we’ve had since I’ve been here. We have a lot of guys that take pride in playing defense. Defense isn’t something that a lot of people want to do. Offense is more fun.”

Following two touchdowns in the early stages of the third quarter — a 15-yard pass from Gillum to Hurst; and a 2-yard run by Cornell — Colton Yarbrough intercepted a pass and ran 17 yards for the touchdown to make it 41-0. It is the eighth defensive touchdown for the ‘Skins this season.

Briar Rohrer scored on a 2-yard touchdown run in the fourth quarter to finish out the scoring.