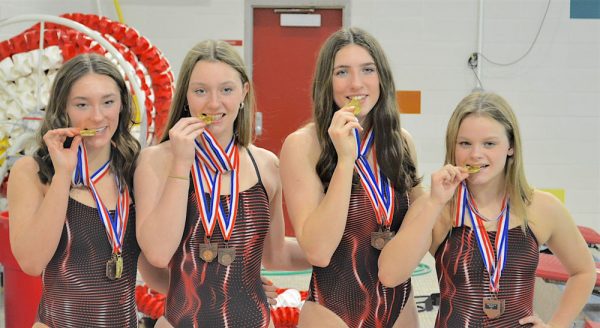 BOWLING GREEN — Despite overseeing such a successful program for the last two decades, Port Clinton girls swim coach Danny Diaz had yet to see his team win a district championship.

That all changed last week when the Redskins scored 205 points at a Division II district tournament at Bowling Green State University, just enough to hold off Wauseon, which scored 202 points. Oak Harbor was third in the 38-team field with 193 points.

As usual, Port Clinton was led by super sophomore Kami Periat, who won the 50 freestyle in 23.54 seconds, and the 100 butterfly in 56.84. She was also part of the 200 medley team that included Gabbi Porter, Carlie Blaesing and Alexa Taylor, which won in 1:49.47, and led the 200 free relay that was comprised of Porter, Blaesing and Taylor.

“It’s the first district title in program history,” said Diaz. “We’ve been second, third, fourth and fifth. It was awesome to experience it after all these years.

“We just wanted to perform well and continue the great swimming. The girls came ready to swim, and I believe they have more left in the tank. I think they’re ready to make their mark at the state tournament.”

“They swam incredibly well. We had goals going in to get all three relays to state. Alyse and Skyler could be district champions, we knew that going in,” said Oak Harbor girls coach Andrea Sorg.

The Rockets had two relays finish seventh and advance. The 200 medley relay team of the Lajtis, Nathan Buderer and Keegan Witt finished in 1:40.67 and the 400 free relay quartet (Buderer, Karter Lajti, Karson Lajti, John Aston) swam a time of 1:40.67.