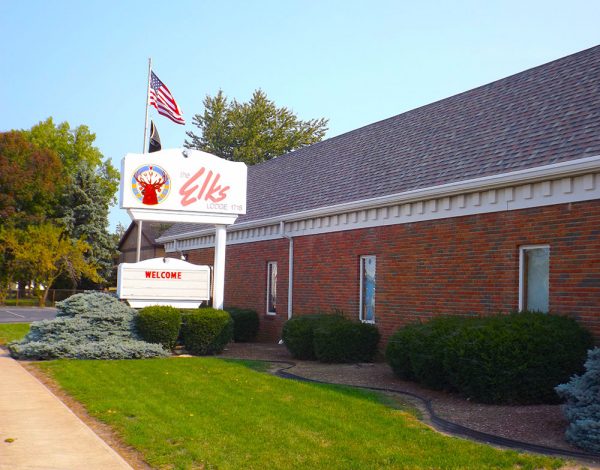 The Port Clinton Elks Lodge #1718 is a spacious building that is often host to community events, such as weddings and other gatherings, at 213 Buckeye Blvd., Port Clinton. (Photos by Phil Wheeler)

So, what is an Elk? According to Webster, it is a large gregarious deer of North America, with the male having large antlers. But, there is another type of Elk, and this one can be gregarious, too.

The local Elks Lodge members gather at the Port Clinton Elks Lodge #1718, 231 Buckeye Blvd., Port Clinton, and are one of almost 2,000 chapters of a fraternal order with a long reputation of community service.

Even in this era of COVID-19 that has made good works a seemingly impossible task, the Port Clinton Elks Lodge has proudly continued to be a major benefactor since its formation in 1947 with 109 members for a wide variety of local groups and causes.

Most recently, the Elks’ $2,500 Gratitude Grant was specifically directed to assist with COVID-19. Those dollars were distributed to Magruder Hospital, St. Vincent DePaul Food Pantry and Ottawa County Transitional Housing.

Scholarships were awarded at the high school and elementary school levels.

Elks Care and Elks Share. It is the motto of all their lodges, said Exalted Ruler Judy McKinney of the Port Clinton Elks Lodge. “The Elks are still working very hard to keep its members, and our community, uppermost in mind and heart.”

The Port Clinton Elks Lodge has made improvements this year to protect its membership and visitors. It approved a premier air purification system second to none, installing the RemeHalo system in all of their rooftop units on June 26 to protect against COVID-19. And, of course, they follow all CDC guidelines.

The Elks also want to hear from the community, with everyone welcome to visit the spacious lodge and see what the Elks are all about. The lodge has a well-designed party center that is often reserved for weddings, family gatherings, luncheons and dinners. Its wonderful kitchen just wrapped up many weeks of Sunday breakfasts. A bountiful garden contributes fresh produce to its kitchen, and its patio is extremely popular. 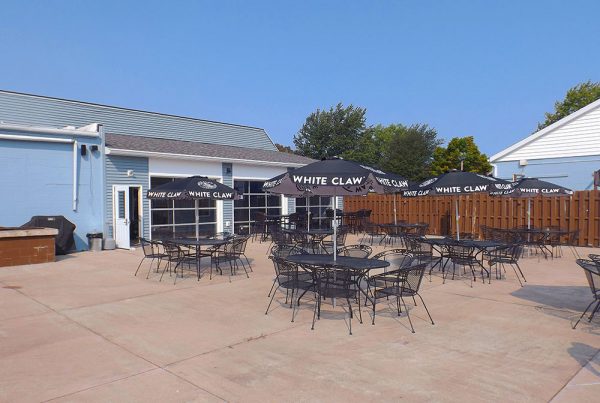 The patio on the east side of the Port Clinton Elks Lodge is a popular open-air summer dining location for Elks Lodge members.

Nationally, the Elks are a fraternal order with hundreds of thousands of members and a 152-year history. The order was founded in New York City on Feb. 16, 1868 under the name “Jolly Corks” by 15 actors, entertainers and others associated with the theater. The membership has since expanded to include all.

Today, there is a network of nearly 2,000 lodges in communities all over the country, and since 1947, that has included the Port Clinton Elks Lodge.

Their Mission Statement is simple: “To promote and practice the four cardinal virtues of Charity, Justice, Brotherly Love and Fidelity; to recognize a belief in God; to promote the welfare and enhance the happiness of its Members; to quicken the spirit of American patriotism; to cultivate good fellowship; to perpetuate itself as a fraternal organization, and to provide for its government, the Benevolent and Protective Order of Elks of the United States of America will serve the people and communities through benevolent programs, demonstrating that Elks Care and Elks Share.”

It is a generous charitable foundation that each year gives millions in scholarships, and is an inspiration to youth, a friend to veterans, and more. The Order is a non-political, non-sectarian and strictly American fraternity. Proposal for membership in the Order is only by invitation of a member in good standing. To be accepted as a member, one must be an American citizen, believe in God, be of good moral character and be at least 21 years old.

The youth of our country have always been important to the Elks. It is for this reason the Elks Drug Awareness Education Program was launched to warn primary grade students and their parents of the dangers in drug use. Additionally, every lodge observes June 14 as Flag Day, a tradition which the Elks began in 1907 and was later adopted by the Congress as an official observance.