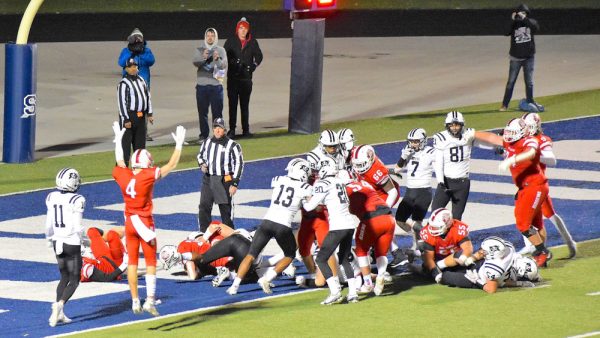 Garrett Cornell scores his second touchdown of the game to give Port Clinton a late victory against Perkins on Friday night, 19-14. (Photo by Kira Lucero)

With everything on the line and the season hanging in the balance, Port Clinton rose to the occasion in crunch time as it rallied to defeat Perkins, 19-14, in a Division IV regional semifinal at Strobel Field at Cedar Point Stadium.

Trailing 14-13, Redskin defensive back Cashes Jackson made a diving interception to get Port Clinton (12-1) the ball back with 7:58 to play, and the ‘Skins drove 59 yards in 12 plays, scoring on a 1-yard touchdown run by Garrett Cornell to take the lead for good.

“Cashes Jackson was an unsung hero. People go after him because he’s short,” said Port Clinton coach Beau Carmon. “I was thrilled for him to get the interception.”

Jackson talked about the pick.

“The guy I was guarding was going deep, and then I saw the quarterback rolling out right and the receiver started coming back to the ball. I was able to undercut it and intercepted it,” Jackson said.

Following the interception, Port Clinton faced a second-and-1 from the Perkins 33-yard-line after a 9-yard run by Tyler Webb and a pass interference penalty by the Pirates. Cam Gillum fumbled the snap, but recovered it and ran for eight yards and the first down.

Gillum ran the ball on the next three plays tto give his team a first-and-10 at the 12; on second-and-8 from the 10, he ran for six yards, and Cornell picked up two yards on third-and-2, coming up just inches short of the first down.

But Gillum’s sneak gave the ’Skins a first-and-goal at the 1, and Cornell took another carry and ran behind the left guard for a touchdown and the game’s final points.

“We got down there and I thought about kicking the field goal on fourth down,” said Carmon, who called a timeout with his team facing a fourth down. “But the coaches and the players wouldn’t let me.”

The decision came after a meeting between Carmon and the offense.

“We looked at Coach Carmon as a team, thinking of different plays to run during the timeout, but ultimately he decided to keep it in Cameron’s hands,” said Cornell. “He was reliable all night, and we trusted that he would make the play for us.”

Cornell talked about the touchdown.

“Actually, I looked at Owen Auxter and asked him if he wanted to run it in. Owen looked back at me and said that he would block his butt off so I could score the last touchdown,” Cornell said.

The two-point conversion failed, but Port Clinton had a 19-14 lead with 2:40 remaining. On the ensuing possession, the Pirates picked up two first downs, but a sack and a penalty left them with a second-and-16 and then a third-and-21 with time winding down.

The Piraters were unable to extend the game, failing to convert on four consecutive plays.

“Perkins is a really good football team. They beat us the first time and could have done it again. Perkins has a great defense, they’re really strong up front,” said Carmon. “We did enough to win the game.”

The Pirates started their comeback when they scored just before halftime on a 33-yard touchdown pass from Logan Lesch to Jayden Rowe with just 26 seconds remaining in the second quarter. It was a jump ball, and Rowe, who is 6-foot-4, was able to grab hold of the ball because of his height advantage. Jon Normington-Slay’s extra point cut the deficit to 13-7.

On the final play of the third quarter with Perkins facing a third-and-7 at the Port Clinton 12, Collin Nemitz (30 carries, 205 yards, TD) broke two tackles and took it up the middle and tied the score, and Normington-Slay’s second PAT gave the Pirates a 14-13 lead and the momentum. 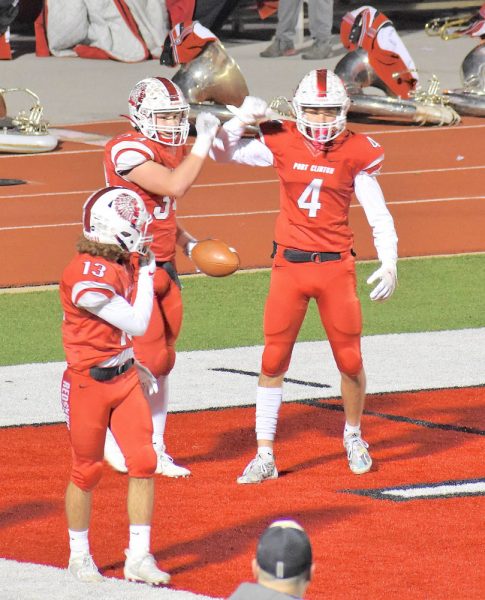 Port Clinton raced to the lead against the Perkins Pirates on Friday night with a first quarter score by Garrett Cornell (34). It was his first of two key touchdowns that captured a 19-14 victory in the Division IV regional semifinal at Strobel Field at Cedar Point Stadium. (Photo by Kira Lucero)

No. 3 Port Clinton jumped out to a 13-0 lead with the first score, a 6-yard touchdown run by Gillum, coming two plays after a muffed punt late in the first quarter.

The second touchdown came on a 1-yard run by Cornell with 2:59 to play in the first half, capping a 42-yard drive. The score was set up by a 27-yard connection from Gillum to Josh Hurst on the previous play. The short field came as a result of Adam Thorbahn sacking Lesch at the 1-yard-line on third down.

A key sequence took place midway through the third quarter when both teams turned the ball over within three plays of one another. Port Clinton held a 13-7 lead when Gillum, who was rolling out to pass, was sacked and fumbled the ball, which was recovered by the Pirates at the Redskins 10. But three plays later, Nemitz fumbled the ball, which was recovered by Auxter, and Port Clinton was back in business.

The ‘Skins started the game with the ball and drove the length of the field and nearly scored, but fumbled at the Perkins 4-yard-line and the Pirates recovered to end the drive.

Perkins, seeded ninth in the region, was responsible for the lone blemish on Port Clinton’s resume. The Pirates (9-4) defeated the ‘Skins, 21-20, in week three of the regular season. This time, Port Clinton found a way to eke out the victory.

Perkins came in riding high, having defeated Edison and Lutheran West by a combined score of 62-14.

Lesch completed just 3-of-14 attempts for 42 yards, a touchdown and two interceptions. Perkins turned the ball over five times, with the others coming on the muffed punt and two Nemitz fumbles.

Gillum completed 9-of-19 passes for 103 yards, but he had a nice game running the ball, carrying it 16 times for 81 yards and a touchdown.

Whether it was Jackson, Cornell, Gillum, Webb, Thorbahn, Hurst, Auxter, Anthony Aukerman, Dagan Meyers or Hunter Shell making plays, someone came up big in the most dramatic of situations for Port Clinton.

“Find a way,” Carmon said to his team after the win. “We knew it wasn’t going to only be the same guys. We needed guys to step up.”

Cornell was limping throughout the game because of a knee injury sustained in the first quarter, but he remained a force on defense, making a number of key tackles.

“It was tough, but I told our trainer and Coach Carmon that there was no way anything was going to keep me out of that game,” Cornell said. “Being a senior, I knew that could’ve been the end, and that’s not how I would want to go out. It hurt a lot, but I had to push through the pain to help my team at the end of the day.”

Port Clinton has broken a bevy of school records this season. Twelve wins is the most in program history, and the ‘Skins had never reached the regional finals in the past.

Next up for the ‘Skins is Van Wert, which is also 12-1. The Cougars, the No. 3 team in the region, defeated Clyde, 48-14, to advance. Van Wert is also the reigning state champion.

The teams met last year in the second round of the playoffs, and the Cougars won easily, 46-20. It was the third time in Port Clinton’s history that it lost to the eventual-state champion in the playoffs.

The game will be played at 7 p.m. on Friday at Donnell Stadium in Findlay, which is where Coach Carmon went to college. For information on how to get tickets, visit www.OHSAA.org/tickets.