After the long, drawn out process of developing all of the components for the new Port Clinton EMS operations, Fire Chief Kent Johnson had a deja vu moment when the ceremonial “first tone” sounded on Monday, the unique set of sounds that will signal every EMS run.

“That’s how I started working for Port Clinton 44 years ago,” said Johnson, with a wry smile. “I went from working in a funeral home to helping Port Clinton develop its EMS operations back then. Now I’ve done it all over again – and for the last time.”

Port Clinton’s EMS operation was taken over 15 years ago by regional North Central EMS in a cost-cutting move. When its rates were significantly increased recently, Port Clinton — and Bay and Portage townships — were pushed to opt out.

“It’s wonderful to have our own EMS operation again,” said Port Clinton Councilwoman Roseann Hickman at a recent council meeting. “I was at the Magruder Hospital emergency room recently, and listened to nurses there describe just how important a local EMS operation is for the community.”

“I’m very relieved the job is done,” said Johnson. “It’s the best thing for the City of Port Clinton, and everyone has vested interest in its success.”

The EMS operation will be guided by EMS Captain Brian Gutman. The squad is made up of nine parademics, 14 EMT workers and two EMTI workers, who are advanced EMT employees

“We be on call 24 hours a day, seven days a week,” said Johnson. “We’ll always have at least one paramedic and EMT per shift. Our EMS crews are made up of the greatest group of men and women I’ve ever managed.”

The EMS vehicles were all “repurposed,” said Johnson, gently used ambulances purchased from the Lakeside and Danbury Township fire departments.

“The ambulances are now extremely well-equipped, and in excellent shape,” said Johnson. “My son (Lucas Johnson) is the chief mechanic for the city, and he has them purring like kittens.”

About 100 folks from around Port Clinton and Ottawa County were on hand to celebrate the new EMS operation on Monday, check out the new equipment and meet the EMS crews. 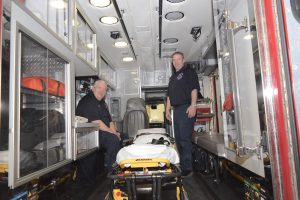 EMTB Terry Whiteside (left) and Paramedic Kevin Peloquin show off a well-equipped ambulance that is one of three new vehicles that make up Port Clinton’s EMS operations. The ambulance were “repurposed” vehicles purchased from Danbury Township and Lakeside, and are in excellent condition, said Fire Chief Kent Johnson. (Photos by D’Arcy Egan) 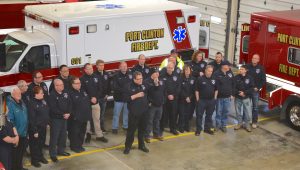 Port Clinton Fire Chief Kent Johnson introduced his new EMS crew on Monday and gave folks the chance to get a close look at the ambulances that will now cover Port Clinton and Bay and Portage townships.