The Port Clinton Fullbacker’s Club moved its popular Wild Game Feed, one of the social events of the year in Port Clinton, to the Ottawa County Fairgrounds for Saturday’s event, and President Rene Stine was a bit worried.

“We always get a big crowd of Redskin football fans,” said Stine. “But with the new location being a bit down the road from Port Clinton, I was keeping my fingers crossed.”

She needn’t have worried. The Wild Game Feed was a sellout once again, the wild game was delicious and sales of raffle tickets and bids in the live and silent auctions were brisk.

The annual fundraiser has helped Coach Beau Carmon and the Port Clinton High School football program find success. Funds have been used to enhance the school’s weight room and the stands at True Lay Stadium.

“This year, coach Carmon wants to attend a three-day team football camp during the summer at Mt. Union College,” said Stine. “And what Coach Carmon feels is needed, we try to make sure he gets.”

The Fullbacker’s Club is also planning to replace the big water tanks on the field at True Lay Stadium, an investment of about $6,000.

The Redskins went 6-4 and 3-1 in the Sandusky Bay Conference’s Bay Division in 2018, finishing one victory shy of a berth in the postseason. Its four losses came to teams with a

combined record of 29-11, and all qualified for the postseason.

“We were one game short of making the SBC championship game last year,” Carmon told the crowd. “We’ve already started to get ready for the 2019 season, working to improve on that record. Our focus is on football, our kids and the community doing the right thing.” 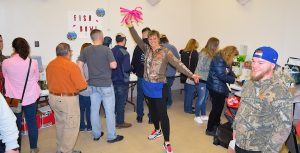 CUTLINE: The raffles and silent and live auctions were popular with the crowds at the Port Clinton Fullbackers Club Wild Game Feed, and Diane Kokinda of Port Clinton had lots of raffle tickets. (Photos by D’Arcy Egan) 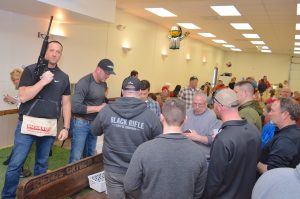 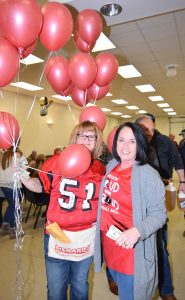 CUTLINE: Balloons were popping at the Port Clinton Fullbackers Club Wild Game Feed on Saturday night, and many of them earned a prize for the football fans who bought them from Kelly Babb (left) and Dawn Chapman.