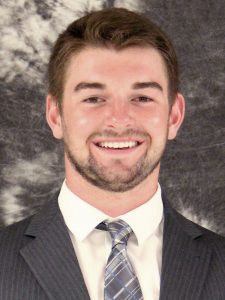 Port Clinton High School grid star Joey Brenner went off to Hillsdale College four years ago with a goal – to carve out a meaningful role with the Charger football team, and to graduate with a path to medical school.

Four years later, Brenner has accomplished both goals, and in a way that’s earned him one of the highest honors the Great Midwest Athletic Conference has to offer.

Brenner was honored as the recipient of the G-MAC Male Scholar Athlete of the Year Award for the 2020-21 school year. Each year, the G-MAC chooses one male and one female student-athlete from that year’s graduating class to receive the Scholar-Athlete Award, honoring a student-athlete who has compiled the most outstanding record in athletics, scholarship and leadership among the student-athletes at its 12 member institutions.

A Hillsdale senior, Brenner is the first male Charger athlete in Hillsdale’s four-year association with the G-MAC to win the Scholar-Athlete Award, and the second Charger regardless of gender, joining 2019-20 recipient Victoria Addis. He’s the third football player to win the award, joining Findlay’s Andrew Alten (2017-18) and Malone’s Austin Cary (2016-17).

Brenner arrived on campus as a quarterback at Hillsdale College in the fall of 2017, but a loaded depth chart and Joey’s desire to help the Chargers on the field any way he could led him to make a position switch midway through his first season.

He made an impact early on as the team’s long snapper, a role he would excel in over the next four years, and gradually worked his way into the lineup as a tight end and H-back for Hillsdale, playing increasingly bigger roles in each of his four seasons.

While Brenner was working hard on the football field, he also was excelling academically at Hillsdale. He graduated in the spring of 2021 with a B.S. in biochemistry, a final GPA of 3.92 and departmental honors, and achieved his goal of making it into medical school, enrolling at the University of Toledo College of Medicine and Life Sciences this coming fall.

During his time at Hillsdale, he was a member of the Phi Kappa Phi, Beta Beta Beta and Sigma Zeta honoraries, as well as the American Chemical Society and the Pre-Professional Society. He was a two-time recipient of the Hillsdale College President’s Scholar Athlete Award given to upperclassmen who maintain a 3.8 GPA or better, and worked on a summer research fellowship at Michigan State University under Dr. Karen Liby, helping to research potential drugs for the treatment of breast cancer.

“No matter how chaotic things get around him, he’s always focused on the task in front of him and completing it to the best of his ability,” said Otterbein.

“He’s faced a lot of challenges in his college career. He came in as a quarterback and made a position switch to tight end, while also becoming our long snapper, and that obviously required a lot of development of new skills and learning to view the game a different way. That on top of the classes he was taking and the other things he was doing, it was very impressive how well he managed all of it.”

Brenner’s impact on Hillsdale College wasn’t just limited to athletics and his own personal academic achievement. He also made time to help others on campus and in the community. For the last several seasons, Brenner has run the Charger football program’s study table, helping mentor his teammates and keep them on track academically.

“This past semester, 79 of our 103 players posted a 3.0 or better GPA, and there’s no doubt Joey’s influence and the work he put in was a big piece of that,” Otterbein said. “Joey is someone who’s not only focused on himself, but is motivated to make everyone around him better.

“He put a lot of time and effort into being a mentor for younger players and helping them develop the skills and habits necessary to be a successful student athlete.”

Despite the demanding workload that comes with being a full-time college athlete and pre-med student, Brenner also made time to give back in other ways.

For two years, he co-chaired the Hillsdale College football program’s Be The Match Bone Marrow Registry Drive with teammate Drew Rubick, helping find potential donors for people with rare blood cancers, and adding over 150 new names to the registry.

Like many athletes graduating in 2021, Brenner faced significant challenges stemming from the Covid-19 pandemic, losing the fall 2020 season and a chance to compete for an NCAA DII playoff berth, and playing an abbreviated spring season in 2021 that ended up being just four games.

Brenner persevered on and off the playing field, going out a winner with his teammates in a 35-28 victory over Ohio Dominican in the spring season finale, and graduating on time without any dip in his grades or academic performance.