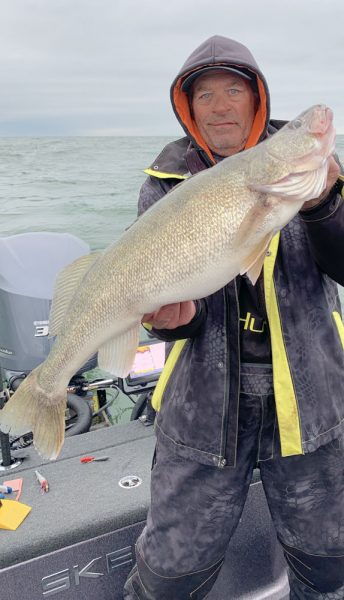 Mitch Dougherty of Port Clinton shows off the Lake Erie walleye he caught on Thanksgiving Day to capture this year’s Fall Brawl walleye derby, a six-week competition that attracted a record 12,087 anglers from around the area, including many out-of-state anglers entering the popular event.

Mitch Dougherty of Port Clinton, a year-round fishing guide, had a special late-season spot on Lake Erie he figured could produce a trophy walleye. But it had to be a fish big enough to win the Fall Brawl walleye derby.

That seemed a very tall order, but Dougherty’s hunch resulted in a victory, hauling in a 12.855-pound walleye to win a fully-rigged fishing boat.

With a record-setting field of the 12,087 anglers entered in the six-week derby, which ran until Nov. 29, fishermen could watch the weights of the top walleye slowly climb the scale during the final week. Dougherty knew he’d have to reel in a 12- or 13-pound walleye win the top prizes, which were Warrior and Hewescraft boats for the two biggest walleye.

So on Thanksgiving Day, Dougherty and his fishing team, which included Steve Newbury and Bob Johnson, decided to trailer his boat to Lorain and troll the near-shore waters.

“I had fished the Fall Brawl for about three years,” said Dougherty. “This was the first time I fished it really hard. I’ve been a walleye tournament fisherman for a long time, and I know what it takes to win.”

Fishermen had been catching big numbers of walleye off Huron, a hot fishing spot this time of year. Walleye from all around Lake Erie head to those Lake Erie waters between the Huron River and Kelleys Island, and feeding heavily as they get ready to spawn in spring on the Lake Erie reefs or the Sandusky and Maumee rivers.

If Dougherty, 60, was taking out anglers on a Straight Fins Guide Service charter, those easy limits would be just perfect. The reports of big schools of walleye around Huron and Vermilion did not tempt him.

“We didn’t need limits of walleye,” said Dougherty. “We needed one of the really big ones, and I had a destination in mind. After launching in Lorain we headed to an area off Sheffield Lake, even though it is not one of my best fall fishing destinations.”

They were marking some walleye and schools of baitfish, probably yellow perch. After a very slow start they finally caught a big walleye, then another about a mile away. At 2:32 p.m. on Thanksgiving Day afternoon, according to Dougherty’s watch, one of the truly big girls decided to snack on a Smithwick Perfect 10 Rogue diving plug swimming behind the boat.

“The Perfect 10 had a custom paint job done by Walleye Fishing Lures, with the primary colors of red and white,” said Dougherty. “We had variety of Bandit lures out, as well, but the Perfect 10s were working best that day.”

Because it was Thanksgiving Day, and the check-in station in Sheffield Lake closed early. Dougherty had to wait until the next morning to get the 30.75-inch walleye weighed in at 12.885 pounds. The weight held up until the closing bell on Sunday morning at 8 a.m.

“We didn’t catch a lot of walleye on Thanksgiving Day, about seven or eight, but we had five that were over 10 pounds in weight, including an 11-pounder and the winning walleye,” said Dougherty.

Dougherty had been a walleye tournament fishermen for the last 15 years, and acquired his Captain’s License early in 2015. He began taking out summer charters at Devils Lake, but in early 2017 he settled on the Catawba Peninsula in Port Clinton, where he guides anglers from spring through fall, including the Fall Brawl.

“Lake Erie quickly became my favorite place,” he said. “The game is much bigger, and it’s well worth the effort to catch a ‘fat girl’ on Erie.

The biggest surprise in the final standings was seven-year-old Gavin Pongracz of Vermilion, who finished fourth in the Adult Division with a 12.185-pound walleye. Gavin and his brother, Jordan, have spent a great deal of time on Lake Erie with their father, die-hard walleye fisherman Gary Pongracz, in recent years, and both are experienced with rod and reel, rigging lures and netting fish. 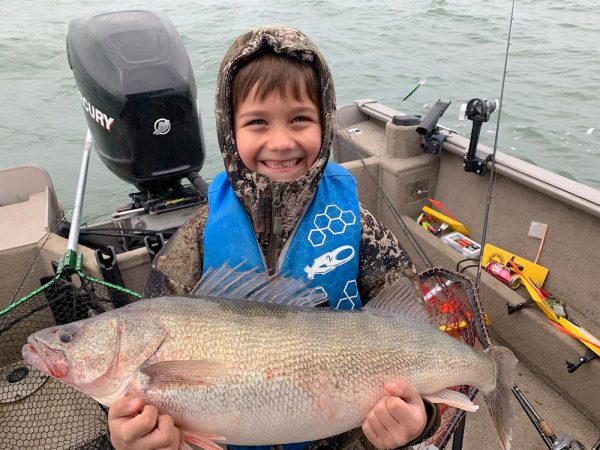 Gavin Pongracz of Vermilion was fishing with his father, Gary Pongracz, in the recent Fall Brawl walleye derby. The seven-year-old angler hauled in this trophy walleye weighing 12.185 pounds all by himself to take fourth place in the Adult Division.

“Jordan wasn’t on the boat with us that day, but he was just excited as Gavin and I were,” said Gary Pongracz. “For Gavin, that’s a fishing moment he will never forget.”