Port Clinton has banner to fly designed by Ben Lucas 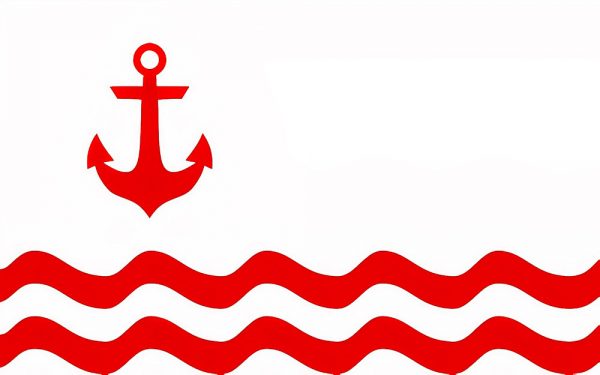 The most poignant comment from survey respondents was that Lucas’s design “follows the five rules of good flag design more than the others . . . (with) no lettering, and use of only a few colors.”

“The defining feature of Port Clinton has always been the lake,” said Lucas, who also studies philosophy at Bowling Greens Fireland. “The city would be completely unrecognizable if it were in Central Ohio, instead of on Lake Erie.

“The waves and the anchor reflect this, the waves referencing the city’s economy, culture, and identity. The anchor reflects our identity as a port city, and the importance of fishing and boating to the culture. What’s important with a flag is being able to represent the city with as simple a design as possible, a reason why I stuck to only a few design elements.”

Lucas created four designs that he did not submit. He doesn’t think he will study design in college, which has been more of a hobby. He plans to major in continental philosophy, or sociology.

The flag design utilized a red anchor and two rolling red stripes to portray waves on a white background, easily identifying that it would represent a port town on Lake Erie.

“It’s the perfect symbol of our community on the lake,” said another comment.

“Ben’s design won because it received the highest scoring average among the three finalists,” said Councilman Gabe Below. “Additionally, it earned the top score, (ranking highest) more times than the other two finalists in the surveys.

“Even when we looked only at the survey data from respondents who identified as residents of Port Clinton, the order of the scores remained the same. Ben’s design was on top.”

The Community Flag Design Competition was managed by the Economic & Community Development Committee of Port Clinton City Council, which included Below, Rosanne Hickman and Pat Hovis. Lucas’s winning design will be on flags manufactured in Ohio, and will cost $40.

Port Clinton officials have displayed a few flags with the Port Clinton City Seal or logo on select city properties, and the same logo can be found on city vehicles and the water bill from City Hall.

The design competition to select a community flag, however, was aimed at boosting local pride by sourcing the flag design from members of the Port Clinton community. It was also designed to portray the physical characteristics of the land Port Clinton inhabits.

“There were no restrictions on residency,” said Below. “It just happened to work out that the winning design from among the 109 entries came from within our own community, which is great.”