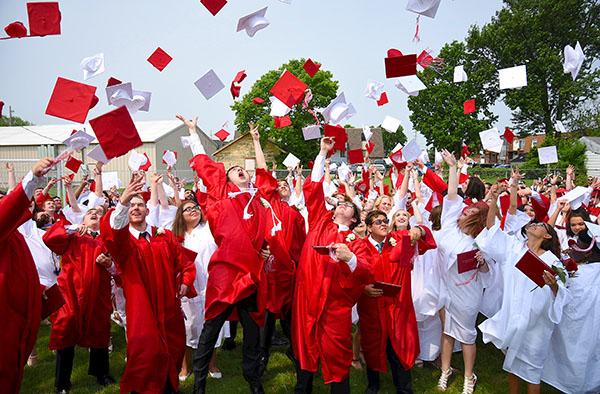 Parents, grandparents, aunts, uncles, guests, and students, welcome to the commencement of the Class of 2019. As I begin my brief remarks I would like to recognize our Board of Education members here today. Without their support many of the accomplishments of this incredible class would not be possible. Board President Beth Benko, Vice President Michele Mueller, Board Members David Belden, Barb Drusbacky and Paul Shaw.

Everyone is full of advice at graduation! Your parents, teachers, employers, school administrators are all full of advice. We’re all ready to give that list of things to do and not to do to ensure the next chapter of your life is as great or better than the current chapter from which you graduate today. Recently, I read a local newspaper article where the writer conducted a survey asking people what advice they had for graduating seniors. A few of my favorites are:

Whatever’s got you so mad you’re shaking so nervous you could throw up, so sad you can’t’ get out of bed, relax. It most likely won’t even matter a year from now.

Well, after reading the article, I had my list ready, too, and penned my words of wisdom into a speech called “Everyone has an Opinion.” I’ve never been a big fan of the list speeches because typically people remember maybe one or two but seldom all of them. Nonetheless, I had my speech completely written… then I watched Port Clinton’s Grande Parade on Memorial Day weekend.

The grand marshal was supposed to be Christine Galvin. As most of you know, Chris was a vibrant part of our community for years serving as the director of United Way and was active in many, many other organizations.

Chis sadly left us this year, passing away too soon and leaving a void in our community. With Chris gone, her family honored her legacy by collectively serving as the grand marshal. As I watched the people dressed in bumble bee outfits and her family and friends smiling as they walked along, I began to think about Chris and a particular encounter we had which had a big impact on me.

We were both mentors for our TNT mentoring program, which is a sort of big brother-big sister program throughout the schools in Ottawa County. We were on a field trip to Lakeside and the kids were all swimming. Most of the mentors were sitting on the shore watching. A few brave souls joined, but most of us just sat, watched, and talked amongst ourselves.

I remember sitting there and seeing Chris walking down the ramp in her bathing suit strutting like she was on the runway of a major fashion event. She walked directly past me and jumped right in the freezing cold waters of Lake Erie. She joined her mentee, and together they had a wonderful time.

When the swim was over, Chris and I were walking back up the ramp and I told her how much I admired her passion, carefree attitude, and how she didn’t give it a second thought about joining in. She looked at me and replied with her now famous phrase, “Pat, I always say yes.”

She expanded and said ironically, “Life is too short to say no to anything. Always say yes, and choose to make a difference every chance you get.”

So I started thinking, I don’t need a list, but rather only one simple phrase… “say yes.” It’s easy to go through life on automatic (cruise control), just doing enough to get buy. It’s easy, and it’s comfortable.

However, if you really want to be special and move beyond simply going through the motions, when the opportunity arises to do something great, choose to say “yes.” When you have the opportunity to make a difference in someone’s life who is really down and most have given up on them, say “yes” to reaching out and lending a hand.

Regardless of what path you choose next in your life, when you’re tired and want to give up, say “yes” to giving extra effort and moving beyond what’s comfortable. And when the opportunity arises be the voice of change when change is needed. Have the courage to say “yes.”

Many of our students here today have chosen to say “yes” when the opportunity presented itself.

Andrew Fillmore said “yes” to being both a great athlete (SBC Tennis champion) and to perform at the top of his class.

Maddy Kodak, Alex Yoh and Lizzy Aukerman said “yes” every day to maintaining a positive attitude and truly caring about others.

Nikki Stitak said “yes” to pushing herself to become the singer and performer she is now.

Bryanna Barr said “yes” to making a difference in the village of Jamao in the Dominican Republic by collecting used student laptop computers and shipping them to students in the schools there.

Nick Perry who moved here his senior year said “yes” by jumping right in to cross country, track and band.

I can, however, think of one time when I wish the person would have said “no.” That’s you Mr. Watts, I would have preferred you said no to Amherst Schools. Actually, by saying “yes” even Mr. Watts created a new opportunity for him and his family.

Too many times in life were stuck on “No, I can’t, I can’t because it’s too hard, or I can’t because I’m busy.” Guess what? Everybody is busy. “I can’t because I don’t have time. I can’t because I’m afraid I’ll fail.” We all have limited time available to us, so don’t waste it by saying “no.” Instead embrace the idea of pushing through your comfort zone, then challenge yourself and say “yes.” The world needs more people saying “yes” and less saying “I can’t.” So as you leave here today, leave with purpose. It doesn’t matter if you were the top performer in your class or barely got by. Don’t spend your time waiting, spend it saying “yes”.

The lists are cool, and some are even fun. As I wrap up today I’ll leave you with my favorite from the newspaper article I mentioned earlier. It reads :

Don’t be afraid to follow your dreams, unless it’s one in which you are the only one in a large crowd who is naked.

Thank you, good luck, may God bless you and “yes”…GO SKINS!