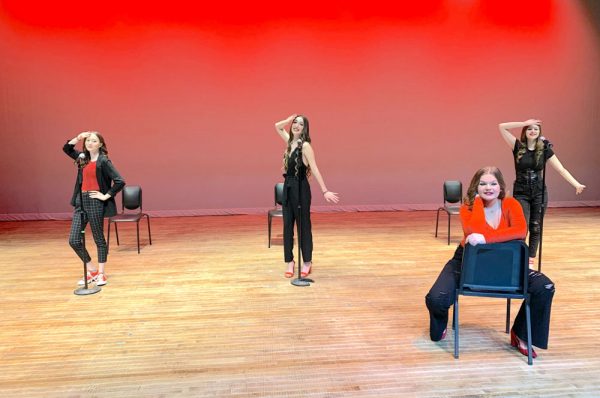 The Port Clinton High School Drama Club is presenting a student production of The Theory of Relativity from March 19-March 26 via Video on Demand! Viewers will be able to purchase a ticket ($12.94) using the platform ShowTix4U and have the opportunity to watch the fully produced and filmed performance.

From Drama Desk Award nominees Neil Bartram and Brian Hill (The Story of My Life), The Theory of Relativity is a joyous and moving look about our surprisingly interconnected lives. Whether you are allergic to cats, in love for the first or tenth time, a child of divorce, a germaphobe or simply a unique individual, audience members and actors alike are sure to find themselves in this fresh new musical.

Through a seemingly unrelated collection of songs, scenes and monologues, The Theory of Relativity introduces a compelling array of characters experiencing the joys and heartbreaks, the liaisons and losses, the inevitability and the wonder of human connection.

“Drama Club is looking for patrons to help support this production and related production costs such as royalties, filming, streaming, and costuming,” said Anna Head, the Co-Director and PCHS Drama Club Advisor. “We are thankful to be able to have a production this year, but many changes have been made to make it possible.

“Due to safety measures and challenges of Covid-19, there will be no live show or audience in the Performing Arts Center. It is with thanks to our supportive community that we are able to have a production, and their continued support is greatly appreciated, now more than ever!”

Patron names, groups or companies will be included in the production’s digital program. Patron categories are: Patron $10; Techie $15; Star $20; Luminary $25; Producer $30; Director’s Club $50; and Honorary $100.  Director’s Club and Honorary levels will received a code via email for a free streaming pass.

Catherine Haskins and Head are the directors and PCHS Drama Club Advisors.  To find the patron form and more information visit www.pccsd.net under the news section.