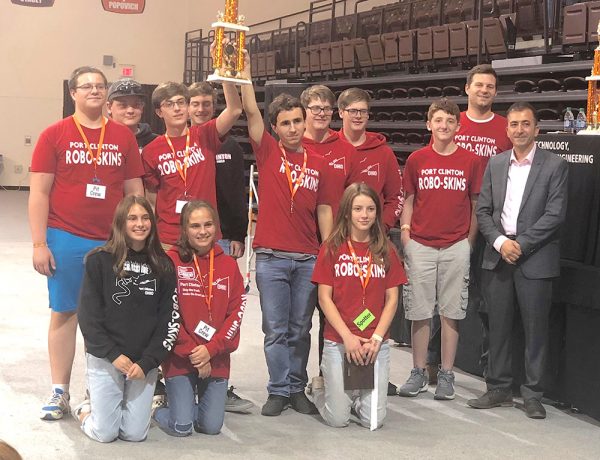 The Port Clinton High School Robotics Team, the “Robo-Skins,” were recently powered to victory by seniors Chase Barton and Dylan Smothers in the Falcon BEST Robotics Competition at Bowling Green State University. The 12 area teams competing were challenged to design, fabricate and program a remote controlled robot from wood, plastics and metals.

Four robots competed at a time in three-minute rounds on a 25 foot x 25 foot playing field to complete tasks. Five drivers per team were required to rotate between rounds. Each team also had a spotter who assisted the driver by setting up, reconfiguring and loading game pieces on the robot during the rounds.

The day started out rough for the Robo-Skins. In the first two rounds no points were scored. The third driver, freshman Grace Smothers and all-time spotter freshmen Serenity Dague, secured 60 points moving the team ranking from 14th to seventh. In the next round sophomore William Zimmerman scored 200 points, moving the team to fourth place. Freshman Seth Haynes also scored 200 points, with Willy Brooks ended the seeding rounds by earning 400 points.

In the final round, the Robo-Skins overwhelmed the competition, accumulating 1,000 points in three rounds, with the second place team scoring only 400 points. The team’s success was in large part to programmer Chase Barto, who programmed the robot to deliver parts autonomously (without driver control). Successful autonomous deliveries were the highest point value tasks. The robot was built by Tommy and Willy Brooks, William Zimmerman, Serenity Dague and freshman Seth Haynes.

“The students were dedicated, coming in after school every day and on Thursday and Friday mornings. They worked hard and it paid off. They really wanted to bring home a trophy,” said Bobby Good, Robo-Skins Advisor and STEM instructor.

The Robo-Skins now qualify for the regional competition in Denver, Col., on Dec. 7-8. The Denver BEST Regional Championship will host the 40 best teams from Colorado, Kanas, Ohio, Oklahoma, Pennsylvania and South Dakota. Anyone wishing to donate to help send the Port Clinton Robotics team to Denver should contact Good at 419-734-2147 or bgood@pccsd-k12.net.