Max Brenner is involved in numerous activities at Port Clinton High School.  He serves as President of both Leadership Council and National Honor Society.  At the 2018 PCHS Homecoming, he was a member of the Homecoming Court and voted Homecoming King by his peers.

As a student-athlete, Max has been active throughout high school as a three-season student-athlete in football, basketball and tennis. Sandusky Bay Conference honors include First Team All SBC in tennis (2018); First Team Football (2018) and Second Team All District (2018).  Next year he plans to further his education majoring in bio-chemistry genetics. Max is the son of Joe and Christine Brenner.

Nikki Stitak has been a part of every Port Clinton High Drama Club production since her freshmen year, either behind the scenes or on stage.  She is the historian for Key Club and a member of International Club and National Honor Society.

Nikki is also involved in the numerous music programs PCHS has to offer by being a member of band, orchestra and the A Cappella Vocal Ensemble, Touch of Class. Outside of school, she has also participated in community theatre at Playmakers. She is the daughter of Brian and the late Nancy Stitak. Next year, Nikki will major in middle child education at Bowling Green State University. 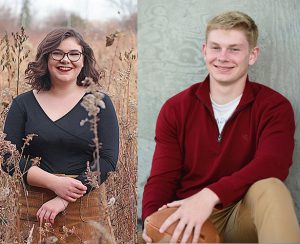