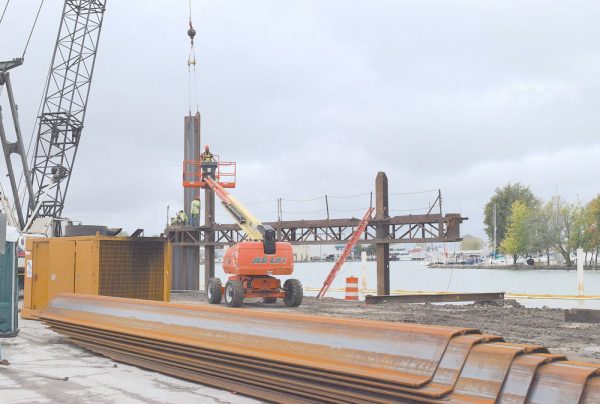 Massive steel bulkheads are being pounded into the ground along the Portage River in downtown Port Clinton this week. When the bulkheads meet bedrock, they will foil flooding and only a small section will be visible. (Photo by D’Arcy Patrick Egan)

The Portage River Walkway construction crews are making a mess along the east bank of the Portage River in downtown Port Clinton this week. As massive steel bulkheads are driven into the river bank by E.S. Wagner workers, with a 10-foot wide, 2,500-foot walkway to be created, the city will soon have a $2.3 million jewel on the Lake Erie shoreline.

“We expect the construction to be completed by the end of May,” said Port Clinton Mayor Mike Snider. He’s really working hard, though, to begin welcoming crowds of locals and visitors to take a stroll and enjoy the new look by the time the popular Memorial Day weekend rolls around.

Port Clinton has been plagued by infrastructure problems over the decades, from combined sewer and water lines to the unenviable task of keeping the city dry when a nor-easter comes to town. The last one flooded the city during the Walleye Festival in late May.

But surprisingly, the new downtown water system quickly drained Waterworks Park, and the bands on the Madison Street Stage played on.

The Portage River Walkway will begin at the north end of Jefferson Street, where blue canopies now provide some shade for picnickers and catfish anglers, as well as docks for Port Clinton’s fire boats. That will change, as the 10-foot wide walkway stretches all of the way to the jetty, where gawkers watch boats head to Lake Erie and anglers park themselves on the river rocks.

“Walkways will actually zig-zag through downtown,” said Snider. “People will have a lot of choices, from the Meals on Madison in the downtown area and its stage to a lot of new businesses to enjoy.”

The Portage River plans include a long-sought marina with floating slips. It is all part of the Port Clinton Access Plan developed by Port Clinton city officials and Poggemeyer Design Group to revitalize Port Clinton along the Lake Erie shoreline.