Almost two years ago, popular portions of Toledo’s Central and Warehouse Districts were designated as Downtown Outdoor Refreshment Areas. In other words, if people played by the rules, they could legally roam the festive DORA outside areas with a drink containing alcoholic in hand.

The new rule sparked a lot of activities – concerts, art shows and more – being held outdoors in the area. The DORA zone also appealed to sports fans looking for entertainment before or after a Toledo Mud Hens baseball game at Fifth Third Field, a Toledo Walleye hockey game at Huntington Centre or the circus or garden show at the SeaGate Convention Center.

As a result, that once tired old downtown district is hopping.

That’s exactly what the City of Port Clinton wants to have happen with its downtown area. A much smaller area than is laid out in Toledo, or course, but giving residents and tourists an extra excuse to visit a few pubs and restaurants and enjoy a port city featuring the Portage River and Lake Erie.

A small contingent of Port Clinton officials made the trip to Toledo last week, camping out at the Holy Toledo Tavern to listen to Cindy Kerr, Executive Director of the Downtown Toledo Improvement District. It was going to be a busy night around the DORA, she explained.

“The DORA has been temporarily expanded from Thursday, Feb. 21 at 5 p.m. through Saturday, Feb. 23 at 9 p.m. to include Promenade Park in Toledo, which is hosting the Fire + Ice Festival at the Water Street location.”

That included lots of outdoor activities, from performances and demonstrations to ice sculptures, ice skating, video games on a big screen and a charity soup cook-off, complete with heated tents.

Paige Brace, a server at the Holy Toledo Tavern on North St. Clair Street, said the local  businesses and customers wasted no time taking advantage of the DORA.

“We’ve had absolutely no problems,” she said. “We’re all adults here. At the bars and taverns, we make sure everyone knows the rules. There are signs to let everyone know the parameter of the DORA, and patrons of the 24 participating restaurants, pubs and entertainment venues are allowed to carry their 16-ounce DORA cups containing an alcoholic beverage.”

The Holy Toledo Tavern is a very unique bar and restaurant attached to the Fifth Third Park, the Toledo Mud Hens baseball field. The complex has a bar and dining room, and connects to the baseball park through a spacious souvenir shop.

The rules are very basic for DORA. Cups are allowed daily between noon and midnight. You must stay with the DORA boundaries, and there are lots of signs.

Once a DORA cup has left a business, it must be consumed before entering another establishment, including the tavern you might have just left. DORA cups may contain beer, wine or liquor, and cannot be reused. You can’t bring your own alcohol and put it in a DORA cup.

No cans, glass bottles or outside drinks are permitted. A DORA cup is about an 80-cent addition to the price of a drink. There is also a sticker too be attached on styrofoam cups that combine alcohol with hot drinks, such as coffee or hot chocolate.

“We have trash cans everywhere for the cups,” said Brace. “We don’t like litter around here.” 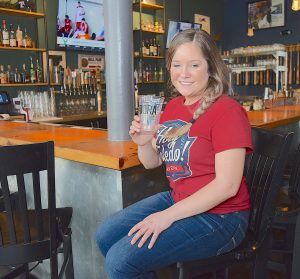 The Downtown Outdoor Refreshment Area has been well received in Toledo, said Paige Brace of the Holy Toledo Tavern, showing off one of the special DORA cups. The cups allow bar patrons to step outside of an establishment and roam a special area of Downtown Toledo to visit with friends, stroll from bar to bar or enjoy outside activities. (Photos by D’Arcy Egan) 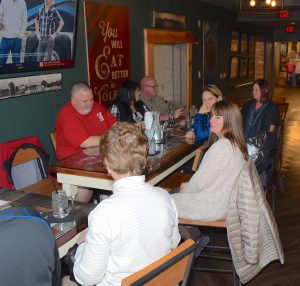 Cindy Kerr, right, the Executive Director of the Downtown Toledo Improvement District, explains the special outdoor drinking rules to a group of visitors from Port Clinton. The City of Port Clinton is investigating the creation of the Main Street Outdoor Refreshment Area, or MORA, the first open container outdoor area in Ottawa County.