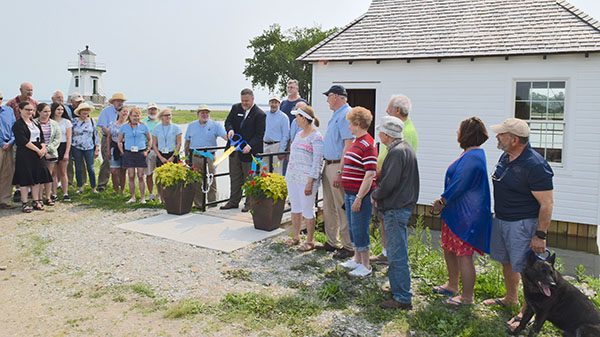 The U.S. Lighthouse Service commissioned the construction of a lighthouse to assure safe navigation in and out of the Portage River. The Port Clinton Light Station was completed in 1833, a 40-foot split stone tower built by Levi Johnson of Cleveland. By 1881, twin piers had been built at the mouth of the Portage River to improve river navigation with a pier head light, which was completed in 1896.

The pier light was converted from oil-fired to electricity in 1926. The lighthouse keeper was replaced by a part-time custodian. In 1952, the light was discontinued and the structure was moved to Jeremy & Sons Marina on the Portage River.

For more than 60 years, the lighthouse stood quietly on private property alongside the bank of the Portage River. Restoration of the lighthouse began in 2013 by the Port Clinton Lighthouse Conservancy. On Aug. 18, 2016, the lighthouse was moved to its permanent location at Water Works Park.

Lighthouse lovers now had the rare opportunity to roam the interior of this unique structure while knowledgeable docents explain the importance of the pier light to local navigation and the important duties performed by the lighthouse keepers of yesteryear.

Visitors can the wooden spiral staircase to the lantern room and view the fully-functioning fifth-order Fresnel lens, then walk out onto the gallery deck for a spectacular view of Lake Erie and its famous islands.