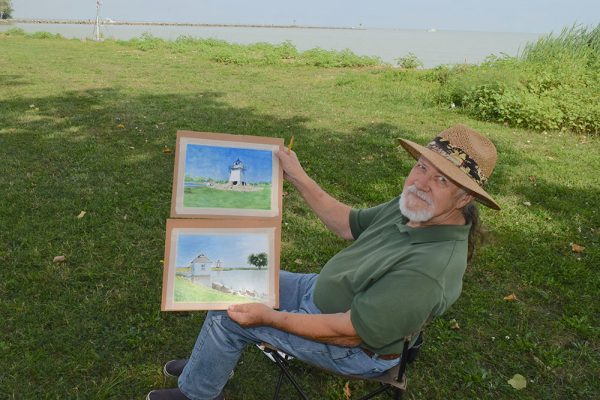 The Port Clinton shoreline is a popular place to hang out these days, especially on a sunny Saturday in August when it is hosting the 3rd annual Lighthouse and Maritime Festival.
The Port Clinton Lighthouse Conservancy has developed a wide range of attractions for the friendly festival, from a splash of afternoon music to food vendors, art exhibits, top-notch speakers and the lighthouse itself, originally built in 1902. A new, improved lighthouse was put back on the site in August 2016. 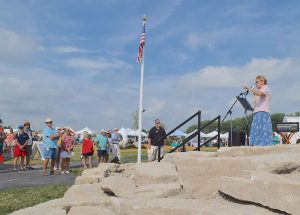 U.S. Representative Marcy Kaptur, the longest serving woman in the history of the U.S. House of Representitives who ranks among the most senior Members of the 116th Congress, was featured speaker at the 3rd annual Lighthouse and Maritime Festival of Saturday at Waterworks Park in Port Clinton. (Photos by D’Arcy Egan)

“We’re grateful to have been able to add the Keeper’s House to the lighthouse site, giving us a permanent place to help us explain the history of the lighthouse, and its importance to Port Clinton,” said Richard Norgard. He pointed out that the conservancy had managed to hold the special day during the International Lighthouse and Lightship Weekend to make it even more special this year.

Four HAM radio operators were also busy, connecting to lighthouses all around the globe for their tent adjacent to the lighthouse.

The featured speaker was U.S. Rep Marcy Kaptur of Port Clinton, who praised the star of Waterworks Park, and the waters behind it. The Port Clinton Lighthouse, said Kaptur, “was a footprint in history . . . that signaled not just the importance of the Portage River and Lake Erie, but the safety of those vessels in a lake that can become very rough.

Rep. Kaptur, of Toledo, introduced by Port Clinton Mayor Mike Snider, is the longest serving woman in the history of the U.S. House of Representitives who ranks among the most senior members of the 116th Congress.