Port Clinton Lighthouse lease a great deal for the city 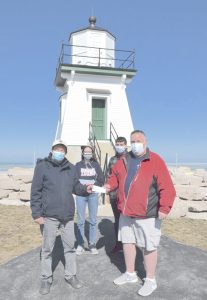 It’s only a couple of bucks, but Port Clinton Mayor Mike Snider accepts the check for the yearly lease of the Marblehead Lighthouse and Keepers Boathouse from Richard Norgard, left, president of the Port Clinton Lighthouse Conservancy as Chahna and J.J. Tripp get ready for a tour of the iconic landmark. (Photo by D’Arcy Patrick Egan)

You can’t buy very much for $2 these days, but it was a great deal for both the City of Port Clinton and the Port Clinton Lighthouse Conservancy this week.

The $2 is the annual lease payment the conservancy makes to the city. It cements an agreement, at least for another year, they will work in tandem to ensure what has evolved into a wonderful tourist attraction will continue to be a shining jewel on the Lake Erie shoreline.

“It’s mostly a formality, but it does provide us with a good faith agreement that the Port Clinton Lighthouse Conservancy will maintain the property in style,” said Mayor Mike Snider. “As you can see, the conservancy has done that, and a whole lot more.”

Working hand in glove with the city, the conservancy has provided walkways and landscaping to beautify not only the Lighthouse, but also the new Keepers Boathouse. Private donations also added a dynamic sculpture, “The Lightkeepers,” by artist Andy Sacksteder last year to the lighthouse grounds.

The conservancy will put the Lighthouse and Waterworks Park in the spotlight again on Saturday, Aug. 21 as it presents the Port Clinton Lighthouse Festival, featuring lighthouse tours, entertainment, music, refreshments, exhibits and the history of the lighthouse.

The conservancy had generated a great deal of social and financial support in order to create the new lighthouse, which was put in place on the Lake Erie shoreline in 2016. It is a replica of the lighthouse that was constructed in 1896 at the end of the city’s West Pier at the Portage River entrance. That lighthouse was decommissioned in the late 1920s and moved into storage in the 1950s.

“We have about 260 members who are “Keepers,” and many volunteer to give tours and help with our annual Lighthouse Festival,” said Norgard. “There are also quite a few individual and family members, as well as a good number of lifetime members.

“It all adds up, allowing us to make sure the lighthouse is always going to be an attraction the city can be proud of,” he said.