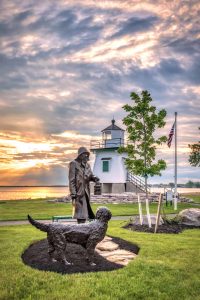 The sculpture of “The Lightkeeper” by noted Port Clinton artist Andy Sacksteder is a companion to the Port Clinton Lighthouse on the Lake Erie shoreline. (Photo courtesy of Jim Gill)

After a two-year hiatus, the Port Clinton Lighthouse & Maritime Festival will return to Waterworks Park on Saturday, Aug. 20 from 11 a.m. to 5 p.m. New to the event this year is a Plein Air Show hosted by the Greater Port Clinton Area Arts Council and a Classic and Wooden Boat Show. At least a dozen boats will be displayed around the lighthouse, and plein air artists will create on canvas throughout the park.

Norgard will share the history of the Port Clinton Lighthouse as one of three featured speakers. Also speaking at the festival will be Bob Reynolds, grandson of Matthews Boat Company founder Scott Matthews, who will talk about “The Maiden Voyage of the ‘Onward,’” Matthews’ 9,000-mile voyage on a 70-foot yacht. John Gibson will speak on prohibition and its ties to Port Clinton.

Volunteers are still needed to help run the festival. For more information on the festival or on volunteering, visit www.portclintonlighthouse.org.