Symphony music fans can delight in the epic grandeur of Mussorgsky’s “Pictures at an Exhibition” on Saturday, April 27 at 7:30 p.m. featuring 15-year-old piano prodigy Gavin George, a Port Clinton native. The full symphony orchestra is directed by Carl Topilow at the Sandusky State Theatre and will be the finale for the Firelands Symphony Orchestra’s Concert Season.

A Pre-Concert Conversation with young George, who dazzled a sellout audience a year ago in a performance for Port Clinton’s Musical Arts Series, will begin at 6:30 p.m. at Sandusky State Theatre. Symphony tickets are $30-33 for adult season and $10 for students with preferred seating. Students are free to sit in the upper balcony by showing a Student ID on the night of the concert. Call the FSO Box Office (419-621-4800) or visit firelandssymphony.com/tickets.

Originally written as a piano composition, “Pictures at an Exhibition” by Modest Mussorgsky was composed as a memorial to his friend, the Russian artist Viktor Hartmann, who died in 1873. The suite consists of 10 movements, each a musical depiction of 10 paintings by Hartmann.

George will perform Rachmaninoff’s Rhapsody on a Theme of Paganini, a concerto-like work for piano and orchestra. It exploits the tonal structure that is ripe for variation from Paganini’s 24th Caprice, and Rachmaninoff shows it off right at the top of the piece. The audience will have the opportunity to hear George perform this piece and note the excitement and complexity throughout.

Growing up in Port Clinton, George began formal instruction at age three-and-a-half and made his concerto debut at age seven performing Haydn’s Concerto in D Major. As a gold medal winner for two consecutive years in the American Association for the Development of the Gifted and Talented International Piano Competition, George performed multiple times in Carnegie Hall and was awarded a full scholarship to study and perform at the Vianden Music Festival in Luxembourg.

He became the youngest musician to perform on the Emmy-award winning show From the Top, broadcast on NPR, and was awarded first prize in the SAA’s International Piano Concerto Competition performing Beethoven’s Concerto No. 3. 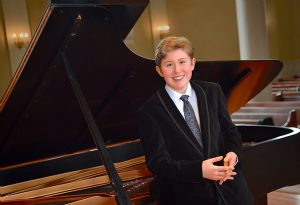 Port Clinton Middle School announces its Honor Students for the first grading period of the 2022-2023 school year: Students on the Principal’s List,...

R.C. Waters Elementary participates in a school-wide initiative. It is called Positive Behavior Interventions and Supports (PBIS). PBIS is a process...