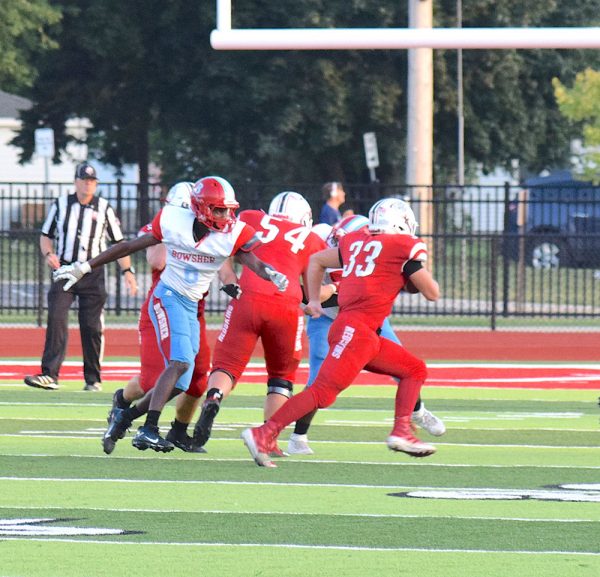 Redskins running back Cooper Stine scores one of his five touchdowns on Friday night against visiting Toledo Bowsher. (Photo by D’Arcy Egan)

PORT CLINTON — After starting the season 0-3, Port Clinton was desperately seeking a win and got it, defeating Toledo Bowsher, 42-8.

Port Clinton running back Cooper Stine led the way, scoring five touchdowns as the Redskins slowly took control of the game. Stine scored on runs of 28 and eight yards, respectively, in the first quarter. Stine added a 5-yard touchdown run in the second quarter and a 7-yard fumble return for a touchdown as Port Clinton (1-3) took a 35-8 lead halftime.

Stine’s final touchdown came on a 17-yard run in the third quarter to account for the final score. The other Redskin touchdown came in the second quarter on a 9-yard pass from Colton Klima to Connor Gillum.

Stine finished with 17 carries for 172 yards and four touchdowns.
Klima completed 10-of-13 passes for 123 yards to go with one touchdown and two interceptions.

Port Clinton accumulated 353 yards of total offense compared to 225 from Bowsher (2-2). Since the Rebels are a Division I school, the win should help the Redskins get some valuable computer points.

On Saturday, the ‘Skins travel to Cleveland to face Villa Angela-St. Joseph (3-1), who are coached by former NFL quarterback Elvis Grbac. 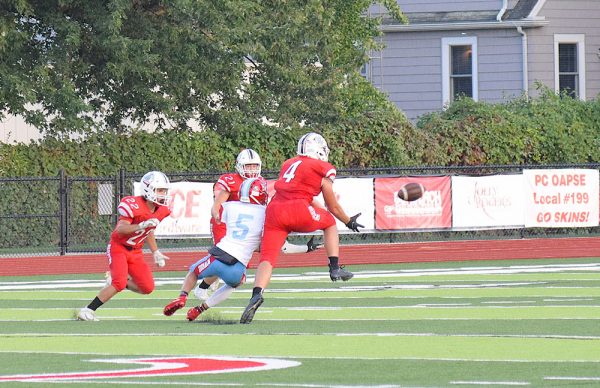 The Port Clinton defense put on a show on Friday night against visiting Toledo Bowsher, thwarting the passes and stonewalling its running game. (Photo by D’Arcy Egan)