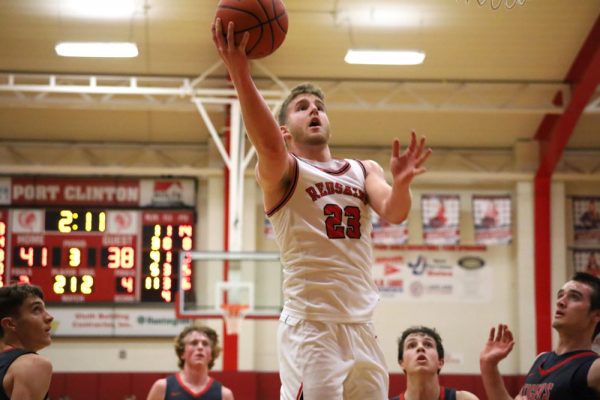 Over the years, many of the boys’ basketball matchups between Port Clinton and Huron have been epic battles.

I remember broadcasting a tournament game at Sandusky High School when a Port Clinton student over my left shoulder was bickering with a Huron parent in the stands to my right and below. Our broadcast location was in the middle.

The next thing I knew, we had bodies trying to climb over our table to get at one another. And there was the year that Port Clinton guard Scott Thomas shut down Huron’s “all everything” player, Gus Johnson in a Port Clinton win.

Then there was the year that both teams scored more than 100 points in a shootout at Huron. So many times the Sandusky Bay Conference Championship came down to Huron and Port Clinton.

Saturday night was reminiscent of those games, with the Redskins coming out on top last Saturday night, 61-52.

The Redskins jumped out on top early in the game, but Huron came back strong in the second quarter to take a one-point lead at the break. However, Port Clinton outscored Huron 30-20 in the second half to secure the win.

“The guys played really well while battling foul trouble and adversity all night,” said Redskin Coach Ryan Hicks. His 6’3” junior, Jackson Beasley, had the best night of his season so far, scoring 24 points and grabbing six rebounds. Adam Thorbahn added 17 in the victory.

The win puts Port Clinton at 4-2 on the season. They play at Margaretta on Friday night before hitting the road again at Vermilion on Friday, Dec. 30.