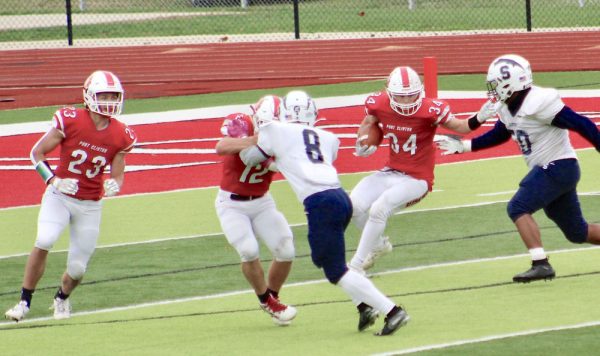 Port Clinton wrapped up its football season with a 21-14 victory over visiting Sandusky on Saturday night. (Photo by Madeline Recker)

PORT CLINTON — Despite being knocked out of the playoffs, Port Clinton had something to play for against Sandusky in its final game of the season. The Blue Streaks (1-8) had the Redskins’ number in recent years, and Port Clinton (5-4) managed to stop that trend and get a win over Sandusky.

The ‘Skins did just that, defeating the Streaks, 21-14, at True-Lay Stadium.

The winning drive began for Port Clinton at its own 31-yard-line, as the ‘Skins marched 69 yards in nine plays with quarterback Cam Gillum scoring on an 11-yard touchdown run with just over one minute to play.

“We played Sandusky in 2017 and ’18, and they had their way with us both times. We didn’t feel like it was a great matchup for us, so we moved on and picked up Bellevue,” said Port Clinton coach Beau Carmon. “(Sandusky coach) Mike Franklin’s been there a long time and has done a great job. We knew it’d be a tough game. Anytime you play any team in the Lake Division, you can’t go by their records. They got their first win the week before we played them.

“It was real big for our program to get the win. We played three teams in the Lake Division, and we were 2-1 against them. We’re grateful that Sandusky was okay to play us. It was a tough-fought game. It was a true four-quarter game.”

The ‘Skins broke a scoreless tie in the first quarter when Tommy Owens scored on an 8-yard run, and

Andrew Hanson’s extra point made it 7-0. Sandusky cut the deficit to one point in the third quarter when Desmond Williams had a 69-yard touchdown run, but the conversion run failed.

Port Clinton pushed the lead to eight points when Owens caught a 14-yard pass from Gillum later in the third, capping off a six-play, 65-yard drive, but the Streaks tied it at 14 when Williams scored on a 4-yard run and ran in the conversion.

A key sequence in the game came when the Streaks failed to score after having the ball at the Port Clinton 1, and the drive started at the Redskin 29.

Owens, a Danbury transfer, finished his career on a high note, catching seven passes for 87 yards, including a 41-yard reception that led to the game’s first score, and ran five times for 43 yards and a touchdown. Garrett Cornell ran 17 times for 85 yards.

“If you want to play like teams against Sandusky, you have to have weapons if you want to have a chance to win,” said Carmon. “A lot of people like to talk about coaching, but you either have players or you don’t. We’ve got players that have worked hard in the offseason. Tommy and Garrett are a good 1-2 punch with speed and power. Tommy can run fly sweeps and catch passes, Garrett can run between the tackles.”

Gillum, who made great strides this season, completed 11-of-18 passes for 89 yards and two interceptions and scored the game-winning touchdown.

“He’s still going to make mistakes, but he’s going to learn from those mistakes. He made some good plays, and scored the game-winning touchdown. We trust him in that position,” said Carmon. “He’s shown a ton of composure this year, and a lot of leadership for a sophomore. I think the players have responded to him. The seniors have played very hard. Not just Cam, but the whole team has played well together.”

Carmon also credited Adam Thorbahn for playing a great game, one that saw the sophomore finish with 15 tackles, a sack on the game’s final play and six tackles for loss.

With the season over, the ‘Skins look to the future and hope to take some momentum with them into the offseason.